The Apple television looks like a much bigger LED-backlit Cinema Display, according to a CultofMac source.

According to our source, who has asked to remain strictly anonymous, the Apple HDTV looks like Apple's current lineup of LED-backlit Cinema Displays but is "much bigger." It has a built-in iSight camera for making free FaceTime video conference calls. And it has Siri, the iPhone 4S's voice-activated virtual assistant.

The supposedly 'well-placed' source claims to have seen a working prototype of the device. "It resembled an Apple monitor, only much larger," the source said.

The built in FaceTime camera is said to allow for calls and has sophisticated facial recognition capabilities that allows it to zoom into the user's face and follow them as they walk around the room.

Calls can be initiated by Siri, the virtual assistant found on the iPhone 4S. "[Apple] used Siri to make a FaceTime call," the source said. 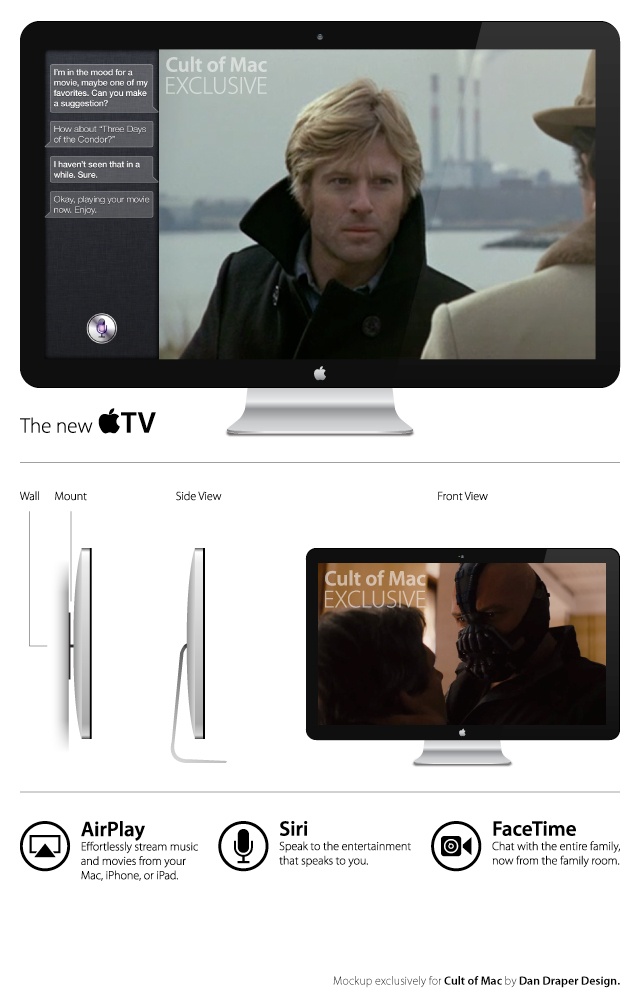 Sab - May 8, 2012 at 2:26am
I doubt this is a final design apple do not follow other companies designs so they well make the tv a little thicker a camera is needed not just for FaceTime but for things like Skype (many people use this) and gesture controls
Reply · Like · Mark as Spam

Kool Guy - May 8, 2012 at 6:57pm
Apple wouldn't follow other manufutacturers' trend but they will follow the market's trend. If they can make the MacBook air. It's possible to make a super thin tv
Reply · Like · Mark as Spam

Thai - May 7, 2012 at 8:38pm
This source may not be that reliable or this is just one of the prototypes that d designing team is still debating. Just like the 1st iPhone, it's small but gotten 3 different designs. Apple prolly got 10 different designs of d tv. 1st of all y would they make d tv that thick wen the trend is thin, n it's not like this is d 1st tv so tech for a thin tv is unavailable. Other manufacturers have been making super thin tv for yrs. especially, for d iPhone, iPad, the battery is huge so that's y it's thick, this tv I presume wouldn't operate on battery, therefore it should be no problem to be thin. Overall unreliable source regardless of what the source claim
Reply · Like · Mark as Spam

Thai - May 7, 2012 at 8:27pm
Now with this for sure the iPhone or iPod can act as a remote control. Wonder if apple will have flash storage in it to store movies, probably will. Getting 1 fasho
Reply · Like · Mark as Spam
9 More Comments
Recent