Apple is reportedly looking at Samsung's futuristic flexible OLED displays for an iPhone 'Yoga', according to the KoreaTimes.

While Kwon didn't give out any names, industry sources here believe that Apple is likely to be one of the handset makers asking Samsung to provide them flexible screens. This makes it hard to rule out the possibility that an iPhone 'Yoga' could appear sometime in the future, they said.

"We will be mass producing flexible OLED displays from the latter half of this year as the demand from our clients is significant," said Kwon. "OLEDs will replace LCDs as the main mobile displays from around 2015 as the screens are thinner and brighter. Samsung has massively invested in OLED-related technologies and will continue to do so."

Industry officials believe that Samsung wouldn't be this bullish about flexible OLED screens if Apple wasn't sharing its enthusiasm.

"Apple is the iconic company in the industry that will continue to set the trends. If Samsung finds increasing industry demand for a futuristic product like flexible displays, it's hard to imagine Apple doesn't have something to do with it," said an analyst from a U.S.-based investment bank. 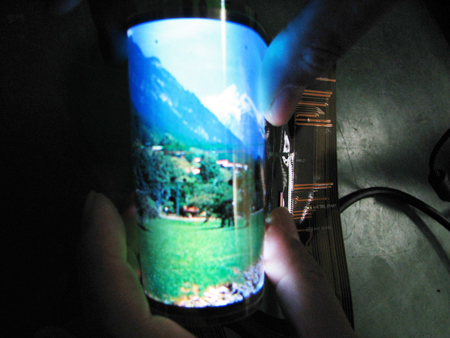 Russell - May 15, 2012 at 4:59am
Samsung should up the price of their components. Apple enjoys fat margins on their products so why can't their suppliers do the same?
Reply · Like · Mark as Spam

boreddrummer - May 14, 2012 at 7:34pm
Isn't the iphone like 25% samsung hardware, not just the screen. Strange who apple goes to for quality hardware =l
Reply · Like · Mark as Spam
1 More Comment
Recent