Apple took Psystar to court in 2008 on claims of copyright-infringement after the company made a business out of purchasing copies of OS X and selling them on hardware it put together under the "OpenMac" moniker. Psystar fired back with its own complaint, saying Apple was not following fair use guidelines with its software, and was misusing its copyright. A U.S. District Court sided with Apple in 2009, saying that Psystar "violated Apple's exclusive reproduction right, distribution right, and right to create derivative works," a decision that led to a permanent injunction against the clone maker in December 2009.

"We are sad," said K.A.D. Camara of Houston law firm Camara & Sibley. "I'm sure that the Supreme Court will take a case on this important issue eventually." 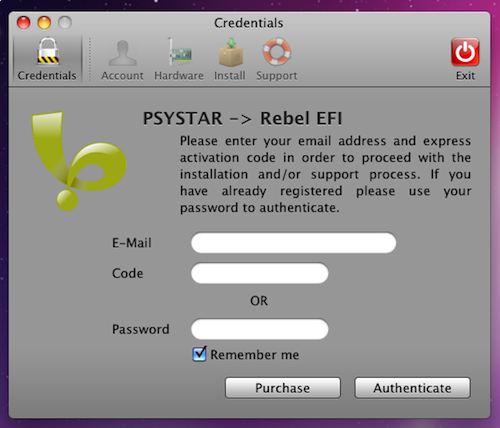 Tdtran1025 - May 15, 2012 at 6:50pm
No you wouldn't. It's a stolen idea and collective work of open source community. The community has been doing this project ever since OS X was ported to Intel platform. It is an elegant and intelligent method requiring deep knowledge of OpenBSD to mimick the hardware of of True Mac. Apple torelates this practice for these users of legally acquired OS X because eventually they would purchase Mac hardware which, by comparison are quintessential. But what Psystar did was outright economic larsony, selling hacks, contributing no knowledege, depriving owners true and proud experience of Mac ownership. If you have an aging PC box and want to purchase an Apple machine, google it. when you successfully run OS X on an Intel box, you may not want to return to Wins.
Reply · Like · Mark as Spam

smate333 - May 16, 2012 at 3:22am
I disagree on both counts. Rebel Efi was fairly priced and it was very easy to install with great support. After install, the rebel application automatically configured your system and downloaded all necessary kext files. It was no hassle. Many of the programmers are from the hackintosh and osx86 community and it is hard to argue if they had the rights to sell or not since it was an open project. Apple should not be able to force you to buy their hardware, you can legally purchase Mac OS only, as long as the OS is not modified, Apple should have no business of who does what after sale.
Reply · Like · Mark as Spam

Samsung - May 15, 2012 at 6:32pm
Maybe cuz Apple banned their asses to hell n back whilst eliminating all traces of the dodgy company
Reply · Like · Mark as Spam

ratGT - May 16, 2012 at 1:00am
You never needed their 'solution'. They were using bits and pieces that were already available all over the Internet for free, under their own label. You can still find those solutions. Just Google it.
Reply · Like · Mark as Spam
Recent