Apple is reportedly planning to bring Siri to the iPad with iOS 6, says 9to5Mac in yet another report on iOS 6 features.

Siri on the iPad is activated by a quick hold of the home button, just like on the iPhone 4S. The interface slides up from below the display with a clever animation. Siri is built into the iPad as a small window on top of whatever interface the user is currently interacting with. This Siri window with rounded corners sits at the bottom center of the display, as you can see in our mockup above. The Siri iPad interface takes very little space over the iPad interface currently in use, and is designed with the same linen texture as on the iPhone 4S. Siri for iPad also works from the lock screen.

It's believed, although not confirmed, that Apple plans to launch Siri for the iPad 3. Apple is expected to unveil iOS 6 at WWDC 2012. 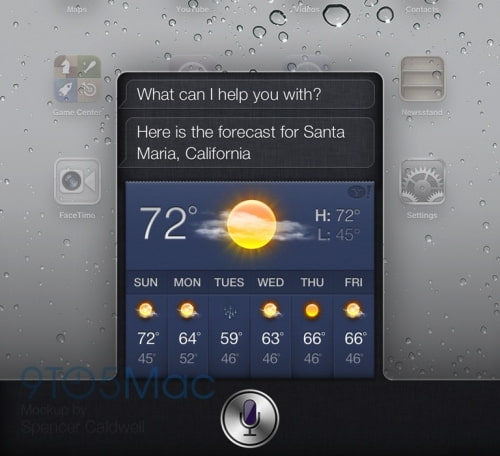 NoGoodNick - June 4, 2012 at 6:56pm
Makes a lot of sense, since the main restriction on the iPad wasn't the hardware, but the load of the Apple servers. Now that Apple had heavily invested in those servers, it makes sense it open the other devices up for it. That should give a nice mid-year boost to the new iPad sales.
Reply · Like · Mark as Spam