Gizmodo Australia has viewed a training document which reportedly details a new Google Nexus 7 tablet which may be announced this week.

Google's going to announce a 7-inch, Nexus-branded tablet called the Nexus 7. According to the leak, it's built by Asus, with a 1.3Ghz quad-core Tegra 3 processor, GeForce 12-core GPU and 1GB of RAM with two different storage variants: 8GB and 16GB.

The Nexus tablet will also feature NFC and run Google Wallet (probably only in the US) and Android Beam. The screen is an IPS display with a 178-degree viewing angle, running a resolution of 1280 by 800. The device will also sport a 1.2 megapixel front-facing camera. The battery will also give you 9 hours worth of operation. 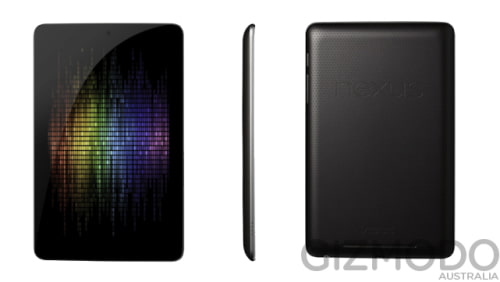 Samsung=Shiite - June 25, 2012 at 3:54pm
Same price as the kindle fire eh... Bet amazon are looking over their shoulder
Reply · Like · Mark as Spam
Recent