Apple has responded to Italian regulators who threatened the company with a shutdown of its operations in Italy for not complying with its two year free warranty law, reports Reuters.

On Monday, the country's watch dog agency said that despite being fined 900,000 euros, Apple has still not sufficiently complied to the antitrust request and threatened temporary closure of its operations in Italy and fines of up to an additional 300,000 euros.

Apple has launched an appeal against the original regulatory decision.

"We have appealed the recent decision of the (Italian) court as it was, in our view, based upon an incorrect interpretation of the law," Apple said in a statement emailed to Reuters. "We have introduced a number of measures to address the Italian competition authority concerns and we disagree with their latest complaint." 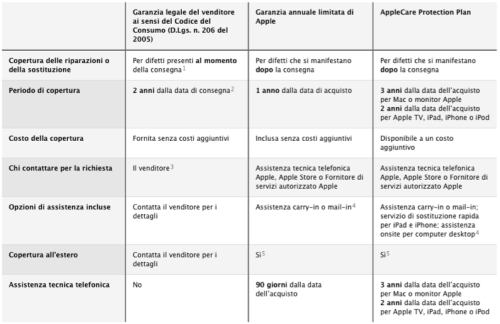 Fuck EU - July 5, 2012 at 5:38pm
The people of Europe should be outraged at the EU's policy. In effect, they are saying that everybody must buy an extended warranty (which is built into the price) whether they want it or not. How anti-consumer can you get?
Reply · Like · Mark as Spam

Russell - July 6, 2012 at 4:08am
EU policy is saying manufacturers must PROVIDE FREE 2 yr warranty. They are not requiring consumers to buy it.
Reply · Like · Mark as Spam

Fuck EU - July 6, 2012 at 4:56pm
Of course they are requiring consumers to buy it, you moron. They simply add the cost on to the sticker price. Have you got no critical thinking skills at all?
Reply · Like · Mark as Spam

Fuck apple - July 5, 2012 at 1:01pm
In Bulgaria (EU) apple do give two year warranty I wonder this gready apple why do they resist to give two years in the other part of EU??
Reply · Like · Mark as Spam
12 More Comments
Recent