Yellow Jacket has been designed as the world's first smartphone defense case. We intend to protect both the user and the smartphone from harm. The case contains a 650K volt stun gun capable of taking down an attacker. Yellow Jacket also has it's own external battery, capable of giving the smartphone up to 20 ADDITIONAL HOURS of standby BATTERY LIFE.

Safety:
Yellow Jacket features a safety switch and a rotating electrode cap, both intended to prevent accidental discharge. In less than a second, a user can disable these safety mechanisms by moving the switch forward, rotating the cap downward and then be ready to press the activation button to fire the electrodes and be prepared to confront an assailant.

Size and Weight:
Yellow Jacket is very comparable in size to an Otter Box Defender or Mophie Juice Pack. Coming in around 1" in thickness, it adds another 3/8" in height and nothing in the form of width. The device weighs approximately 4 ounces, and when coupled with an iPhone comes in at 8 ounces, keeping the device impressively light.

Effectiveness:
The shock Yellow Jacket delivers is incapacitating and capable of inflicting pain and injury, but the effects are temporary and a victim will recover in a matter of minutes. 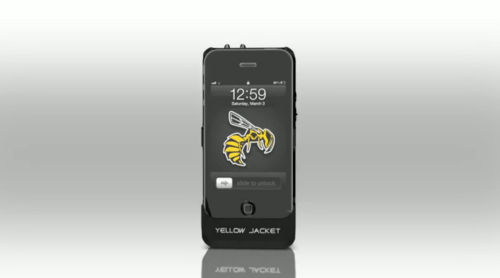 AmriiBacchus - July 12, 2012 at 10:03pm
Because black males commit violent crimes statistically more then other races. Though the demographics are not th issue. It's the thug mentality of the idiots who embrace it. I skipped through the video but it seemed to be a reenactment which if it was then he was probably going for as many details as possible. Which means there is an 80% chance it was a black "thug" male.
Reply · Like · Mark as Spam

Kevin - July 12, 2012 at 8:23pm
I would imagine walking around with my phone in my pocket and somehow triggers the shock.. this idea is great but not to be used like this.
Reply · Like · Mark as Spam