I Am Concise takes a look at 'The Reason for the iPad Mini' suggesting that Apple's main motivator for releasing the smaller tablet has to do with its pricing strategy.

The report notes that on a conference call Tim Cook once said, "one thing we'll make sure is that we don't leave a price umbrella for people". Meaning, the company won't price its products high enough to allow competitors to come in underneath it with lower pricing. Unfortunately for Apple this is exactly what's happening with the Kindle Fire and the Nexus 7. Competitors are having a hard time competing with Apple's iPad but have found a way to get market share by releasing slightly smaller and thus cheaper tablets.

Apple has employed three strategies in the past to eliminate price umbrellas on its products: create a new product line, keep selling old hardware, and get someone else to subsidize the product.

What will they do for the iPad? Well, we have already seen Apple apply the methodology of keeping old hardware on the market - they now sell the iPad 2 at $399. But, this isn't really eliminating the pricing umbrella, it just lowers it. In order to eliminate the pricing umbrella Apple needs to serve the $199 to $399 price range. ($199 is the bottom of the market until new technologies emerge, new price models emerge, or a company decides to sell the hardware at a loss to gain market share.)

Take a look at the chart below to see this idea visualized or hit the link for more analysis. 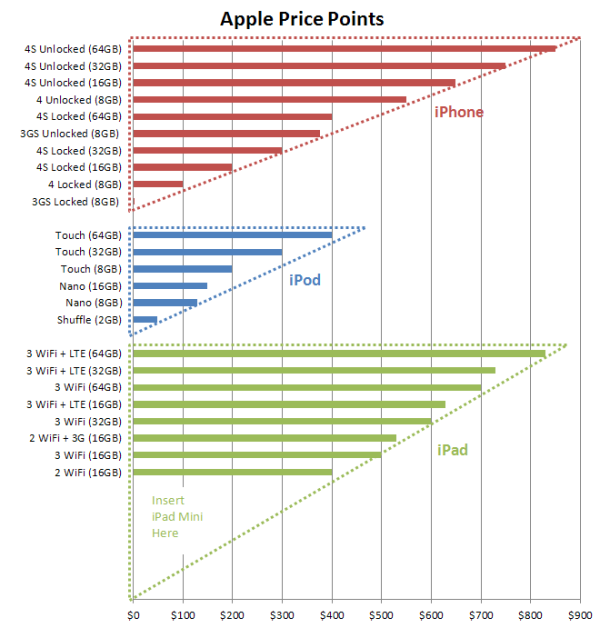 justabrake - July 25, 2012 at 5:06am
If it can't be read in direct sunlight then the kindle the people will buy apple has no market here otherwise.
Reply · Like · Mark as Spam

Steve Balmer - July 23, 2012 at 4:44pm
Well, let's see. Use the A5 processor from iPhone4 and 3G chip, throw in 8gig of NAND, and a new 8' IGZO touch panel from Toshiba. People, what we have here is a new breed of tablet with practically all the lower priced components that are already at peak production rate. If A is to price it at $279, the umbrella is folded because it's a beautiful sunny day.
Reply · Like · Mark as Spam
3 More Comments
Recent