Steve Jobs nearly leaked the original iPhone when he walked out of his home to sign for a Fedex package with iPhone in hand, a former Apple employee tells Business Insider.

---
We had a problem with the WiFi on an early build of the iPhone. Steve had this house that was just a no man's land for WiFi, with thick walls. It finally got to the point where we were fried and panicky because MacWorld was coming up, so we decided to go and debug at Steve's house.

When we got there, Steve was sitting in his car in the driveway rocking out to some really loud music. The car was off, he was just listening. When we he saw us, he turned off the music, popped out of the car, and said, "Hey guys!" We went into his house and started debugging the problem. Then all of the sudden, this crazy ass medieval buzzer starts going off and startles us, and even startled Steve. He quickly figured out it was coming from the pedestrian gate on the other side of his house.

Up walks the happiest FedEx guy you have ever seen, coming up to the door. It's not Steve's normal guy, which is why he was surprised. So Steve goes out to meet him because he has to sign for this package, but he's got the iPhone in one of his hands. Steve just walks out casually, drops the phone behind his back, signs the package, and the FedEx dude marches off.

Now you have to understand, when we carried the phones to his house, we carried them in these Pelican lock boxes. These phones were never to leave Apple's campus, and Steve just casually throws it behind his back. That was the first time I saw someone casually come close to seeing the iPhone before it was announced, and he didn't even know it. If the FedEx guy had just tilted his head, he would have seen it.
---

It this case Apple was successful in keeping the device a secret; unfortunately, it wasn't so lucky with the iPhone 4 when an employee accidentally left unreleased device in a bar. 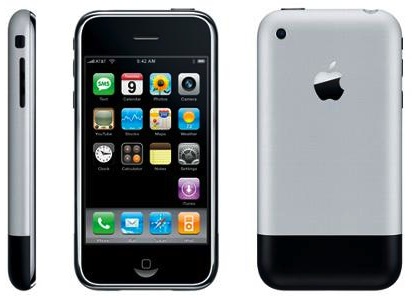 Really!!! - July 31, 2012 at 2:23am
Who cares! It would have been more interesting if he said SJ was the first to sit on a toilet with iPhone and browse the Internet. Why do people write this shit. OMG! OMG! OMG! One day in band camp...
Reply · Like · Mark as Spam