Photos of a purported battery for the 'iPhone 5' have surfaced on 9to5Mac. The battery packs have a slighter greater capacity than previous generation batteries.

The new battery also has an increased watts-per-hour measurement (wHr), 5.45 wHr, which is an increase from 5.25 and 5.3 on the iPhone 4 and iPhone 4S, respectively. This is a proportional increase due to the increase from 1430 to 1440 mAh.

The battery is marked as being produced in June of this year. Take a look at the photos below. 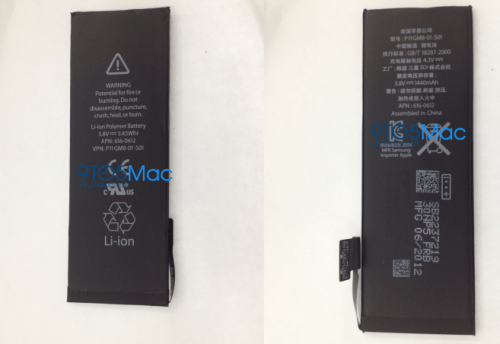 Curtix - August 11, 2012 at 1:45am
Even more evidence that we can expect the same old regurgitated phone from apple. The world desperately needs a new mobile OS.
Reply · Like · Mark as Spam
0

Justabrake - August 12, 2012 at 4:53am
Maybe but if apple would just put out 2 iphones like there expected with there iPads this year then problem solved
Reply · Like · Mark as Spam
0