ChangeWave reports that nearly one-in-three consumers (32%) says they're Likely to buy the iPhone 5 in the future (19% Very Likely; 13% Somewhat Likely).

That compares to 10% Very Likely and 11.5% Somewhat Likely for the iPhone 4S after its launch.

The survey also looked at iOS 6 Maps to see if it affected demand for Apple's new smartphone. Nine-in-ten users (90%) reported it was No Problem at All or they Haven't Experienced Any Problem, while 3% characterized it as a Very Big Problem and 6% said it was Somewhat of a Problem.

"Despite the media attention surrounding both the Apple Maps issue and the Apple Lightning port issue, neither has had an impact on the massive numbers of buyers queuing up to buy the iPhone 5," said Dr. Paul Carton, ChangeWave's VP of Research. "Rather, the survey results show both issues hardly rank as bumps in the road."

You can find the full report at the link below... 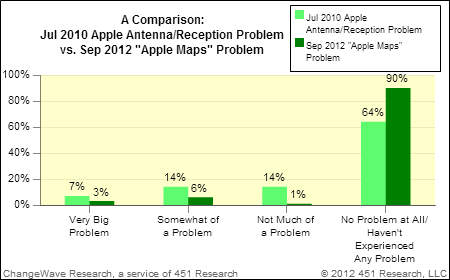 NoGoodNick - October 13, 2012 at 3:16pm
I've always contended that Apple should quit fighting the inevitable, and simple leave a single gateway into their devices specifically for Jailbreakers. That way, if someone wants to jailbreak it, and screw up their 'warrenty', they can, but then they won't have everyone working so hard to uncover all of Apple's vunerabilities. It would also allow anyone who doesn't want to JB to 'shut off' the Jailbreaking vulnerability making their devices MORE secure. It would be a win-win for everyone!
Reply · Like · Mark as Spam

Buster Cherry - October 13, 2012 at 4:20am
Maps on ios6 is a completely different issue than iphone5. I have 4s with ios6. First off, maps controversy is overblown. Works fine for me. I don't listen to turn by turn directions and turn off the road into a river when it says to. If its that important to you, spend some money on a real GPS app. The ios6 was free so don't complain. Plus it will improve. To not buy an updated phone because the iOS has "inferior" map program is ridiculous.
Reply · Like · Mark as Spam