The U.S. Library of Congress has ruled that jailbreaking the iPad and unlocking iPhones purchased after January 2013 is no longer legal.

Jailbreaking iPhones is still allowed under exemptions to the DMCA that will be in effect for three years.

This exemption is a modification of the proponents’ proposal. It permits the circumvention of computer programs on mobile phones to enable interoperability of non-vendor- approved software applications (often referred to as “jailbreaking”), but does not apply to tablets – as had been requested by proponents – because the record did not support it.

Unlocking
In addition the new exemptions only allow for phones you already have, as well as those purchased before January, to be unlocked. Phones purchased after January 2013 can only be unlocked with the carrier's permission.

This exemption is a modification of the proponents’ proposal. It permits the circumvention of computer programs on mobile phones to enable such mobile phones to connect to alternative networks (often referred to as “unlocking”), but with limited applicability. In order to align the exemption to current market realities, it applies only to mobile phones acquired prior to the effective date of the exemption or within 90 days thereafter.

PS3/Game Consoles
The Library of Congress rejected a proposed exemption that would allow for jailbreaking of game consoles.

Because the Register determined that the evidentiary record failed to support a finding that the inability to circumvent access controls on video game consoles has, or over the course of the next three years likely would have, a substantial adverse impact on the ability to make noninfringing uses, the Register declined to recommend the proposed class.


This is quite unfortunate news for those in the jailbreak and unlocking community. We'll keep you update with any more developments.

The full ruling can be found at the link below... 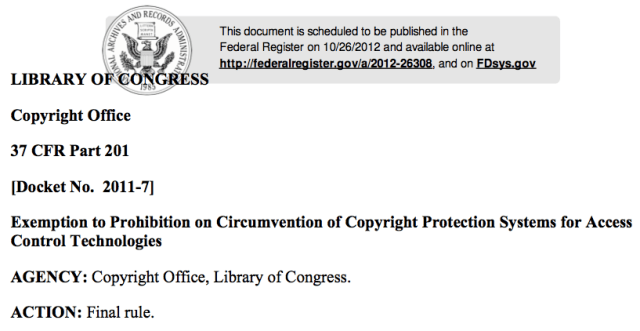 Kowboy - March 8, 2015 at 4:31am
tinyurl.com/on88x4j this link shows that congress themselves passed a law in October 26, 2012 that jailbreaks where considered illegal underneath the DMCA act for playstation 3 online gameing consoles and nothing is being done about it. They are people useing mods online to ruin the games for everyone and sony america will not stop them they are breaking the same law that is still in effect as of today. How can anyone stop them they are people running around invisible on the games that many people play all of those call of duty games are in ruin over hackers taking over on them and many other games they mod their way to success on it ruining game play for everyone that they choose they have illegal booters on the mods to kick anyone with their free will doing all kinds of crazy stuff on the game takeing advantage over other players that bought their game consoles and their games to play for online use. Sony needs fined over not removeing them they continue to let it keep growing while other company manufactures are making other video games no one is saying nothing about it and it continues to go on and on. I wish someone would speak up about it and stop sony america and make them quit allowing them to cheat the games. I told them suggestions how to stop jailbreaks and usb flash drives how to stop them on their network they will not speak up about it and they continue to let it slide they are people putting pornograph images of cartoon characters on their emblems that is pure sickling that I will not mention what they are actually placeing on their profile on this game is called black ops its the 7th part of call of duty they are children doing it and adults that has no manners at all and sony america will not do nothing about it, its activisions,treyarchs games activision they blocked me from a website of their's because I was telling them about those hackers and told them to remove them im getting fed up with people useing mods against me and other players takeing over on those games. It seems like as many times as they compromised people they would not be no hackers on these games people go ahead and buy their games after they hit the shelves and after 2 weeks on each one of those games hackers come on them and ruin the leaderboards they just absolutely go crazy on this game doing things that other players cannot do on here are they any way to get in contact with these companies and make them stop allowing hackers to over run these games if they are not no way of stopping them then they might as well shut down the online servers and let everyone suffer from not being able to get on online any longer its unfair advantage for others that stands and pays out their money to buy a game people buys extension map packs for this game when they come out they like to make that money but not supporting their online services to enjoy it and then others knowing that sony america or the other companies that runs these games will not do nothing about it. They need fined over not supporting their games and removeing these illegal acts. I wished someone would step up and say something about it. Many people are fed up the way these games are they put their money in these games and excepted to play a fair game online but all of us has been lied too and compromised by them saying they wouldn't be no more hackers they lied to sale us games and they are continuely doing it as of this day. Every call of duty game that comes out its over run by hackers cheating honest players out of their fun and money. I want to see it stopped and those hackers removed from online. People that hacks the game knowing its illegal they need fined for it.
Reply · Like · Mark as Spam

SLIMJIM - January 25, 2013 at 8:40am
THIS IS SO FUKIN FAKE. SOME FUKTOID CREATED A FUKIN LITTLE SCARE TACTIC LIKE PEOPLE ACTUALLY GOING TO STOP JAILBREAKING..THOSE WHO COMMENT ABOUT LEAVING THE U.S FOR WHAT LACK OF JAILBREAKING..PLEASE DO? JAILBREAK IS TO ROOTING TO FUKTOIDS..
Reply · Like · Mark as Spam