Griffin Technology is rolling out new music accessories for iOS, including the StudioConnect with Lightning, DJ Connect, Mic Stand Mount and MicConnect at CES.

StudioConnect With Lightning
Leading the lineup is StudioConnect with Lightning, Griffin’s popular all-in-one audio interface for music creation on the iPad, now compatible with the new iPad (4th generation) and iPad mini. StudioConnect provides connectivity for guitars, stereo audio, MIDI-In and MIDI-Out as well as a Lightning charging dock in one compact device. It also features line-level RCA stereo output and stereo headphone output with separate volume control. With StudioConnect, digital music-making has never been easier, combining both audio and MIDI (Musical Instrument Digital Interface) recording into one convenient accessory.

With StudioConnect the audio in and out is simple:
● Audio In – Plug instrument in through a mono 1/4″ jack or plug a mixer into StudioConnect’s stereo 1/8” (3.5mm) jack.
● Audio Out – Left and right line-level RCA plugs. The 1/8” (3.5mm) stereo headphone jack, with its dedicated volume knob, helps monitor what’s going in and out.

MIDI in and out is equally straightforward:
● MIDI In – Connect a MIDI controller through a standard 5-pin DIN MIDI-in port.
● MIDI Out – A second 5-pin DIN connector accepts a sequencer, patch bay or other MIDI gear, allowing the iPad and MIDI apps to act as a MIDI controller.

The updated StudioConnect with Lightning, $149.99, will be available Spring 2013 from select retailers. 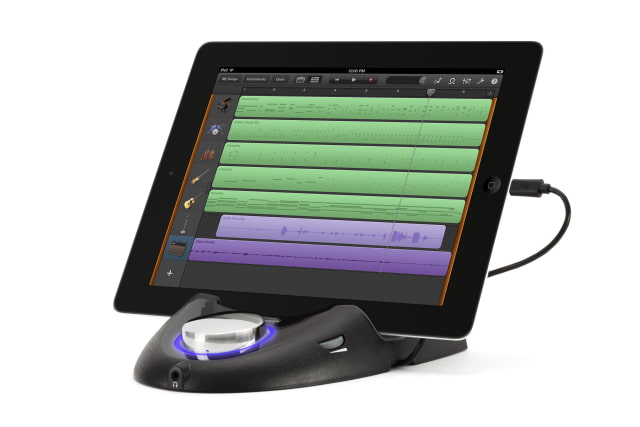 DJ Connect
The new DJ Connect offers DJs a way to pre-cue their music and beat-mix. Designed specifically to work with algoriddim’s award-winning djay and vjay apps, the DJ Connect allows user to have the ultimate mobile DJ experience. DJ Connect has the added benefits of volume control, dual separate stereo outputs and detachable cables for use with iOS devices with 30-pin dock connectors and Mac computers with USB ports. Compatibility with Lightning devices is planned as well. Simply plug headphones into the headphone port and connect external speakers to the RCA line level stereo outputs in the back. When connected properly, the sleek yellow glow underneath the volume knob will illuminate to provide ambient light for those DJs spinning in the dark.

DJ Connect is compatible with algoriddim’s djay and vjay apps for iOS and Mac computers and will be available in May 2013 for $99.99.

Mic Stand Mount
Griffin’s Mic Stand Mount for iPad easily screws onto a standard microphone stand enabling users to raise and lower the iPad to the perfect height. Fully adjustable, the Mic Stand Mount rotates and locks into either portrait or landscape view, and tilts up to 90 degrees. To protect the iPad, rubber inserts securely grip the device on all four sides holding it in place without blocking the controls, dock connector or audio jack. 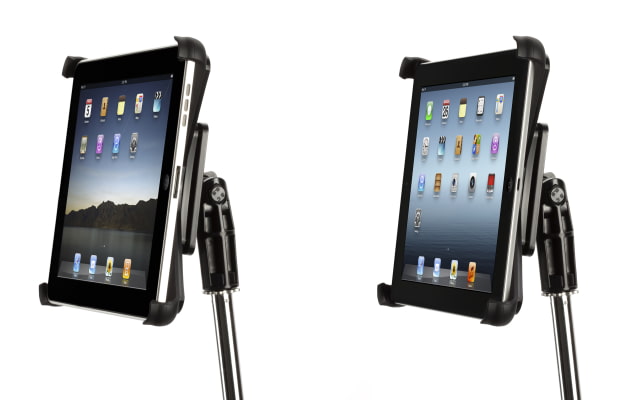 MicConnect
Intuitive to use, simply connect a mic to the XLR input on the MicConnect and plug the 1/8” (3.5mm) audio cable into an iOS device’s headphone jack and launch GarageBand or other compatible apps to get rocking. MicConnect’s phantom power feature even accommodates studio microphones for high-quality recordings. Not only compatible with microphones, MicConnect also makes it possible to record amplifiers, acoustic instruments, and more right into GarageBand. 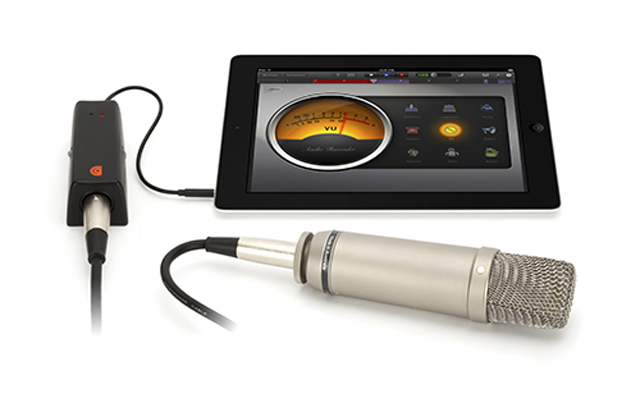