RedleX today released Mellel 2.6, a major update to the leading word processor for Mac OS X. Mellel does it differntly. And better. Again. Mellel 2.6, released today by RedleX, adds QuickLook support, Spread views, and many other new features, all marked by Mellel's well-known tradition of trying to make features work better, even if that means making them work differently.

"With Mac OS X 10.5 Apple introduced a wonderful new feature called QuickLook, which allow you to peep into documents without opening them," says Eyal Redler, RedleX's CTO. "The default for word processor documents, however, was only so-so: the document was not divided into pages, elements like footnotes were missing or misplaced, images were not placed correctly or, in short, it did not look like a PDF. We wanted our QuickLook previews to look like a PDF."

Which is exactly what they do. Mellel document viewed with QuickView look exactly like they would look in Mellel or in print. No compromises. In addition, to save time waiting for the full preview, you can set in the preferences the number of pages you wish to preview.

Another new feature in Mellel 2.6 is the new "Spread View": Mellel now support viewing documents in single page view, two page view, four page view and 'spread' (facing pages together). "It's not the most important feature in the world," says Redler, "but even the little features deserve to be done right."

And they are done right. The new 'Spread' view, for example, takes into consideration the page numbering, and displays odd pages alone when they need to be displayed alone.

* Automatic update: Mellel now supports automatic or manual updates. No more work: Mellel tells you when there is an updates, tells you if it is a free update for you, downloads it, installs it and runs Mellel again.
* Better statistics: the statistics palette is conveniently organised and one can fine-tune what characters will not be included in the count (e.g. punctuation or blank characters).
* Save as PDF: directly.
* Improved CJK: Mellel supports exporting and importing Chinese, Japanese and Korean in several encodings, which vastly improves handling of older documents in those languages.
* Smart style matching: with imported documents or documents with ad-hoc attributes, Mellel will smartly 'sense' the attributes in the text and match them. For example, if one applies a style to text with font in boldface, Mellel will look within the style for a style variation in boldface.
* Windows Hebrew fonts: Mellel now displays vowel marks with most Windows Hebrew fonts (in other OS X apps those fonts are do not function with Hebrew at all).
* And more: Mellel 2.6 offers several other enhancements and includes dozens of bug fixes. 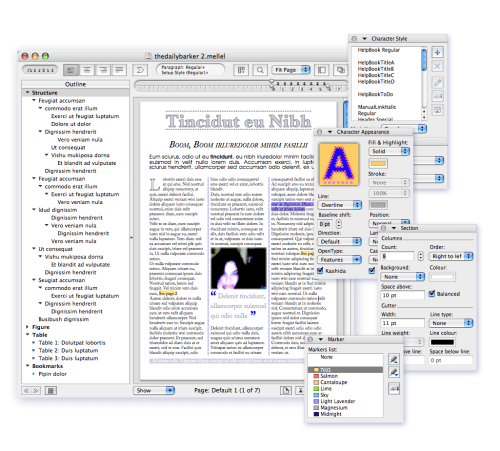