Apple's iPhones were found to be nearly three times more reliable than Samsung's smart phones, according to a FixYa study.

Apple scored 3.47 for reliability; whereas, Samsung scored 1.21. Higher is better.

Here is what the study said about Apple devices....

-----
Pros:
• Dead Simple UI — FixYa users enjoy the “sleekness” and “simplicity” of the Apple experience, comparing it favorably with other phone manufacturers. A simple UI that everyone from grandmothers to small children can use is definitely a calling card of all iPhone devices and something that Apple has historically been very cognizant of when designing their products. There were nearly no complaints from FixYa users about the usability or confusing nature of the iPhone device.
• Reliability — FixYa users lauded the reliability of the iPhone, stating that it is almost always working as intended in regards to core features and never hits a constant roadblock with one feature. This isn’t to say there were no complaints about the product. Rather, it’s an indication that the issues weren’t showstoppers and rarely continued to crop up consistently on a weekly basis.
• App Ecosystem — Considering Apple essentially pioneered the appstore model, this is a logical pro of the device. While users on Android or Windows Phone ecosystems had complaints about a specific app not being available (although this is becoming less of an issue each day), iPhone users did not. If there’ s an app you want, it’ s going to be available on the Apple App Store.

Cons:
•Lack of customizability — The iPhone’s simple UI is a double-edged sword. While the majority of FixYa users praised the company for its ease of use, some consumers wanted a greater ability to customize the device to their liking while retaining the simple design they enjoy. Apple has notoriously been very closed with their devices, with users essentially getting the full range of functionality out of the box. That works for the majority of consumers, but if you’re a techie and want to add more layers into your personal smartphone experience, the iPhone may not be the best choice for you.
• Battery life — Anyone familiar with the issues surrounding the iPhone4S should be familiar with this complaint. It’s a common refrain amongst Apple users, as a large number of iPhone owners on FixYa have raised the issue when looking for ways to conserve battery life. If you have access to a wall outlet at some point throughout the day this may not be a problem, but anyone who goes on a day-long trip, is using their smartphone to stream music, or send email all day, will find a problem with how long the device lasts off of a single charge.
• Lack of new features with new models: Everyone wants the hot new gadget when it comes to market, and the fanfare surrounding iPhone releases speaks for itself. However, users who have upgraded their old iPhones to new versions felt that the additions to the device and experience were lackluster in nature. Consumers have higher expectations nowadays which may be an issue for Apple. As the old adage goes, “it’s what you’ve done for me lately” that counts. It should be noted however that users who are on their first iPhone don’t have any issues here — it appears to be the multi-device owners that feel the bar needs to be raised at a faster pace.
-----

You can find the full report here. 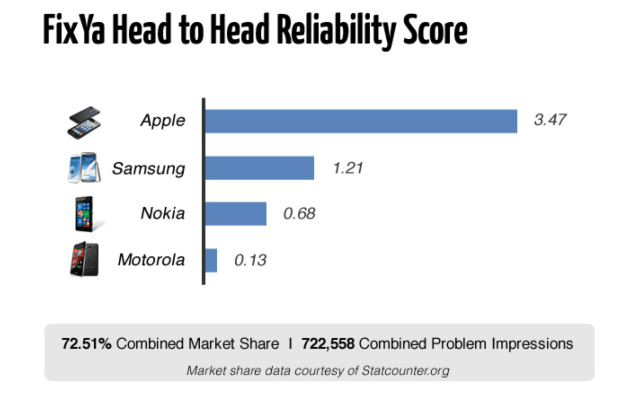 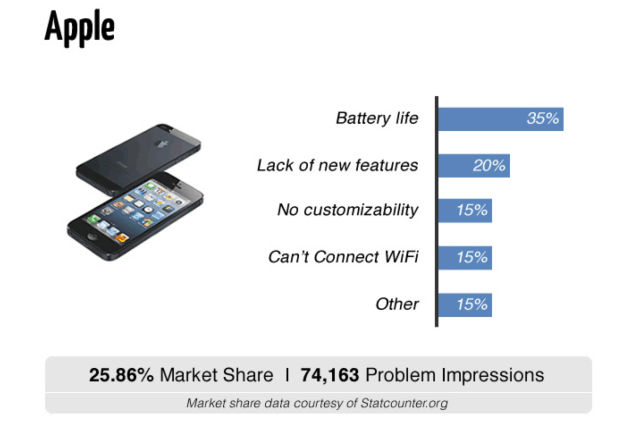 Nima - February 24, 2013 at 8:23pm
I have been apple head since iphone 2g but now I think apple has been sucking so bad. But now Samsung galaxy note and tabs look so much better than iphone and ipad !
Reply · Like · Mark as Spam

Aj - February 24, 2013 at 6:35am
I found Apple phones to be 100X more reliable then Samsung phone.. Samsung phone sucks... Ya I know Samsung phones has Android OS but Samsung phone is a Samsung phone, Either they should improve their phone or Ask google to improve Android.. I have iphone 3gs and then I bought galaxy s 2, I regret that decision, and that was because of integration with google not because of samsung... Hoping soon my contract will over and I will get rid of Samsung... It really sucks..
Reply · Like · Mark as Spam

savoy - February 23, 2013 at 11:26pm
I owned galaxy note 2 , after iphone 3g and iphone 4 , what i can say that android and samsung as to be specified it sucks really just lot of features and lack of usability it is really un-usable its very hard to access all this features its just easy in its ads but its really not , last thing to say NEVER COMPARE SAMSUNG PHONES WITH APPLE PHONES its unfair iphones is the best
Reply · Like · Mark as Spam
23 More Comments
Recent