Ergonis Software has announced the release of Typinator 3.4, the latest version of its highly acclaimed tool for auto-typing text and auto-correcting typos.

The new version adds a number of user-requested features, like the option to temporarily suspend Typinator and to preserve the height of the set list when the window size changes. It also implements a new technique that allows Typinator to expand abbreviations in floating windows such as in Spotlight or in the quick entry windows of OmniFocus and TaskPaper. Finally, the new version includes a number of other improvements and fixes, including a problem that caused the memory requirements to grow over time.

Typinator is a powerful, yet elegantly simple solution that works across all applications to detect specific sequences of typed characters and automatically replace them with text snippets, graphics, URLs, dates and special characters.

For business users, Typinator leads to a layer of operational consistency and productivity across heterogeneous applications. A standard customer service response, a signature image on an email, a clause in a contract - each of these can be inserted in any application with just a couple of keystrokes. For technical users, Typinator automates typing of code and the implementation of documentation standards.

Typinator 3.4 requires Mac OS X version 10.4 or newer, Mac OS X 10.5 (Leopard) is recommended. Visit Ergonis Software's website to learn more about the changes in this release and to download and try the new version.

Availability and Pricing:
Typinator can be purchased securely on the Ergonis Software website. The upgrade to Typinator 3.4 is free for all customers who purchased Typinator in the last 2 years. For information about purchases, including enterprise licenses, volume discounts, and upgrade pricing offers, see the company's web site.

Instead of purchasing Typinator by itself, customers can get the Macility Productivity Bundle that also contains two of the company's other productivity tools, PopChar X and KeyCue. The pricing of the Productivity Bundle represents a saving of more than 35% over the separate purchase of its components. 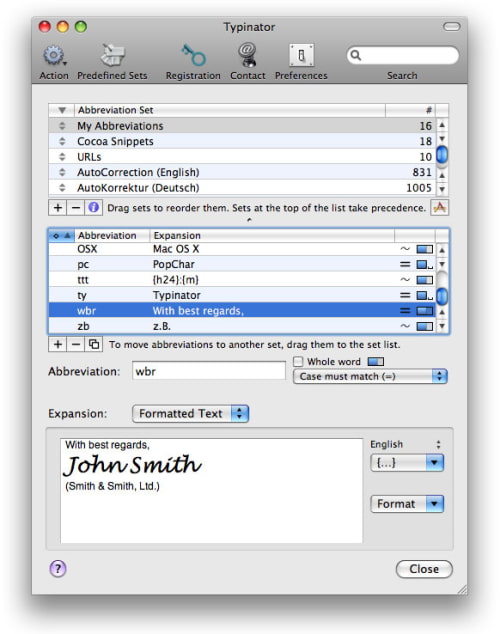