P0sixninja says that he has found the exploits necessary to release a new jailbreak. The hacker contributed to various jailbreak releases in the past including: GreenPois0n, Cdev Reporter, Absinthe, etc.

Evad3rs haven't gone anywhere, I've just discovered all the needed exploits on my own over the past few months

As of yet, p0sixninja has not demonstrated a working jailbreak; however, it's promising that exploits are still being found. It's unclear if p0sixninja intends to pursue a jailbreak release for iOS 6.x or hold back the exploits in hope of jailbreaking iOS 7. 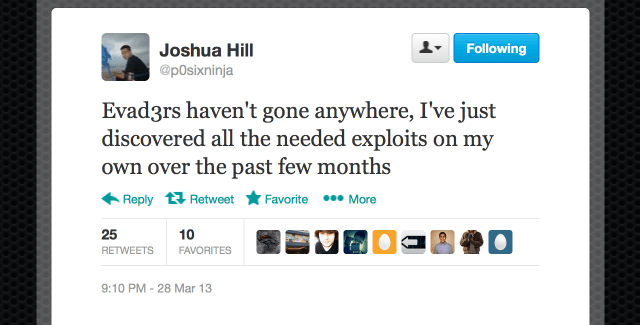 Craig - April 5, 2013 at 12:37am
@p0sixninja After reading the comments in this story, I think you should not post any good news and charge for all your hard work. These people that throw comments at each other dont deserve your hard work for nothing
Reply · Like · Mark as Spam

Phillip - March 30, 2013 at 3:22pm
There are not likely to be any future unlocks. I don't think that anyone is even working on them anymore.
Reply · Like · Mark as Spam

Bill Gates - March 30, 2013 at 9:27am
Hey Joshua, posixninja, Got an extra doobie you can spare?! Any that have been around since early/first jailbreaks know how to take this news. Shall I mention 4.x.x posixninja??! The only thing you found 'all by yourself' is 'no J. O. B.' :). Just remember when and if something comes out for 7.x, it won't be 'only' from Joshua Hill.
Reply · Like · Mark as Spam

iCrunch - March 30, 2013 at 3:20am
Who in the f.......FUCK'all'y'all, bitcheees! Nobody wants to hear your whining. This is great news and to answer the question at hand: WAIT until iOS 7 until you burn another jailbreak. Evasion was AWESOME and everyone has had a LONG and WIDE window of opportunity to jailbreak. Let's not waste a good exploit on some dumb f*ck n00b who updated to 6.1.3 or on anyone who dragged their feet because they're LAZY! Anyone who belongs in either group: TOOOOOUGH! And now you get to think about why you upgraded when everyone told you NOT TO! Love y'all! :)
Reply · Like · Mark as Spam
23 More Comments
Recent