Clever Coding has announced the release of the latest update to their hit App "Paper Pilot". The latest update improved the overall experienced by polishing the user interface and adjusting the control the plane. Paper Pilot was originally released on the Apple App Store on January 12th, 2009.

The immersive 3D environments and intuitive controls gained wide praise for the game throughout the iPhone community. The game was built on the Unity game engine which allowed "Paper Pilot" to bring some of the most professional-level graphics onto the iPhone. The movie quality graphics, also provided by the Unity engine, achieve a realism not previously seen on the iPhone and iPod touch.

In the game, you fly a small paper airplane around your offices, your home and even the sewer. The controls are simple and intuitive, you just tilt your device in the direction you want to fly. Swiping your finger across the screen controls the throttle allowing you to accelerate through the levels at break-neck speed.

In the latest update, Clever Coding has made some slight adjustments, based on fan feedback, to the way the paper plane flies in the game. In Paper Pilot 1.1 the plane will climb and fall at a great angle without having to tilt the phone as far forward or back. The change brings even greater command to revolutionary control system. In addition the changes to the controls, Clever Coding updated the user interface to give the game a fresh new look.

The game play has been described as " addicting" as you race against time as you fly through all 8 challenging levels picking up paperclips. Faster times are awarded with better ranks, which unlock future levels. 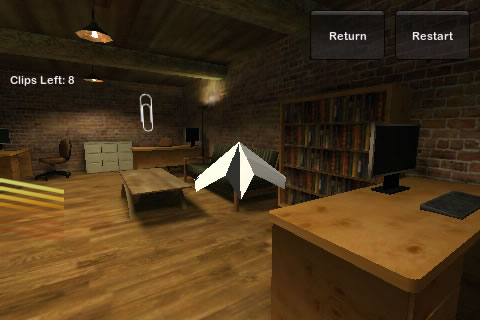