Which.co.uk has posted a new infographic that compares the battery of top selling smartphones.

The iPhone comes in second last place with low scores on call time and internet use; however, it does have the fastest charging time.

Take a look at the graphic below to see the rankings. 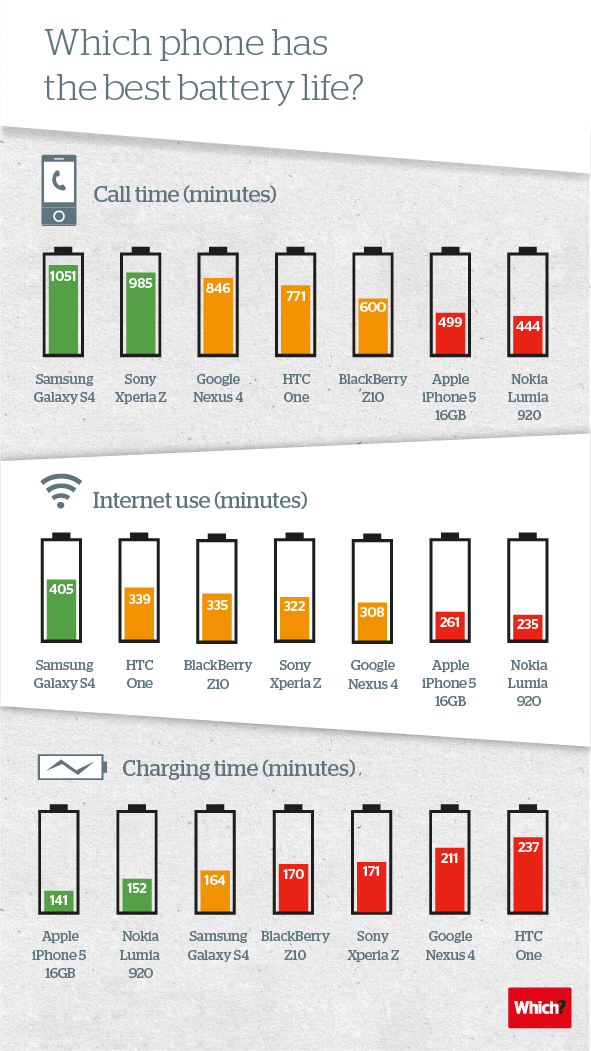 karehn - January 7, 2014 at 10:01am
Samsung S4 has the longer battery life, mine can last for about 8 hours, but I still have to charge it everyday. It's inconvenient for me when I go outside. I have bought a portable charger from Kinkoo: http://www.ikinkoo.com/shop/portable-charger/kinkoo-infinite-one-8000mah.html to keep my phone powered. I love Kinkoo's 8000 mah capacity and fast charging speed.
Reply · Like · Mark as Spam

Saminator - June 30, 2013 at 9:12pm
Freud, it seems that you have no idea what you’re talking about. “Samsung has quad-core and octo-core in international version. Primate Labs ran benchmark tests and results showed the S4 is two times faster than iPhone 5.” Yeah, that might be true, but does it really matter? If the browser rendering speed is only limited by the speed of your connection, games and animations all run at 60 FPS and basically everything you do is just as fast (or faster) then on the “superior” processor? The only time where you might be realizing that you have that “horsepower” in an S4 is when rendering videos or other CPU intensive things. The A6 handles it all well with iOS. Of course iOS is way more optimized since it only has to run on very few phones, but in the end it comes down to customer experience, and they shouldn’t care if a CPU is twice as fast as the other one if the other one does everything just as well. “Iphone has an astounding 1136×640-pixel resolution at 326 pixels per inch. The Screen is a whopping 5 inches, with 1920×1080 at 441 pixel per inch. Are you kidding me! And the Gorilla Glass 3 makes it one of the most solid phone in the world.” Okay, does it really matter? Screen size is a matter of customer preference. Both phones have resolutions and dots per inch that high that you can’t differenciate the pixels from a normal viewing distance. Both displays (resolution-wise) are very crisp, so in the end it comes down to what screen size an individual person wants. The 4 inch screen is definetely more usable with one hand, and the 5 inch screen might be a bit better for watching movies (and on the 4-inch one, the phone is smaller of course). So it comes down to what you prefer. Simple as that. “Ability to change Battery?” Even if that is possible in the S4, again, it’s just a feature to say out loud. Barely any customer will ever change the battery in his/her phone. “Google Now is light years ahead of Siri.” It’s not really the same thing. Also, at what sacrifice of privacy do you use Google Now? Think about it. Also, Now is available on iOS as well. “Google Maps is not available on iPhone. The best map in the world. Really?” Okay, this one proves that you have no idea what you’re talking about. Google Maps is in fact available on iOS (from the AppStore). Google couldn’t afford that they left it out of there because it’s where they get about 50% of the data they use to improve their maps from. Also, there is no such thing as “the best map in the world” – different maps are for different purposes. “You can control TV and any applications with infrared waves.” Nice feature if you want to do that. But they usually ship remotes with TV sets. “Air view, a feature only S4 has that uses heat signature from your fingers to preview emails , videos, and other applications.” Again, just a feature that’s barely a system seller. “Better picture software, with a 13 megapixel, it destroys the iPhone 5 megapixels.” Yeah, the megapixels. Did you ever hear something about virtual upscaling or something? The sensor never ever catches 13 megapixels natively. The camera won’t be any better because of that. “There are 50 more reasons why the S4 outweights the iPhone 5, please refund Apple whatever they paid you to write this article.” Alright, continue your fanboyism!
Reply · Like · Mark as Spam
55 More Comments
Recent