AnandTech has posted a chart that reveals it's not just Samsung that's artificially inflating its benchmark result scores.

Yesterday, Apple SVP Phil Schiller tweeted a link to a report from ArsTechnica which revealed that Samsung has been artificially inflating its benchmark scores for the Galaxy Note 3.

AnandTech has followed up with its own report:

We started piecing this data together back in July, and even had conversations with both silicon vendors and OEMs about getting it to stop. With the exception of Apple and Motorola, literally every single OEM we’ve worked with ships (or has shipped) at least one device that runs this silly CPU optimization. It's possible that older Motorola devices might've done the same thing, but none of the newer devices we have on hand exhibited the behavior. It’s a systemic problem that seems to have surfaced over the last two years, and one that extends far beyond Samsung.

Check out the chart below to see some of the tests that manufacturers have gamed. Hopefully, this added publicity will put a stop to the practice. 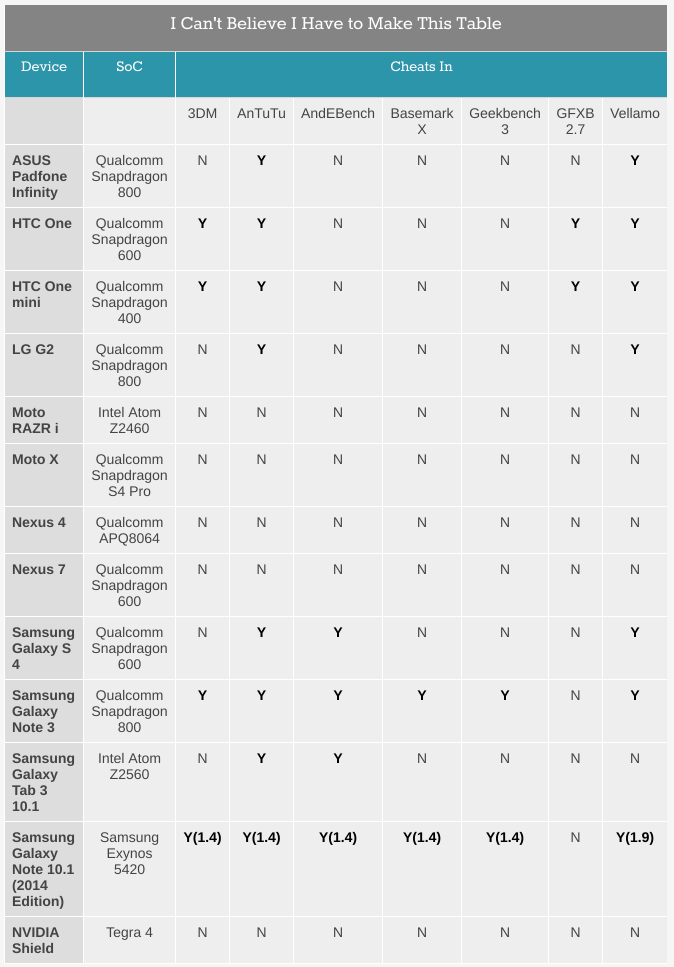 Great. - October 3, 2013 at 1:56pm
http://appleinsider.com/articles/13/10/03/samsung-execs-shown-confidential-apple-nokia-licensing-allegedly-misused-and-propagated-confidential-information
Reply · Like · Mark as Spam

jeremy - October 2, 2013 at 10:05pm
So it says pretty much everyone but motorola and apple cheats. I see motorola on the list that proves it but where is apple? And is it really cheating if the processor can really achieve those numbers, but for whatever the reason it may be (battery, heat, ect.) Daily use never uses the full potential of the cpu. Doesnt mean it still cant do it. Kind of like epa ratings on cars. Most people never get near what it says yet its still there.
Reply · Like · Mark as Spam
10 More Comments
Recent