The iPhone Dev-Team has posted an image showing iPhone OS 3.0 jailbroken but says the jailbreak will not be released until 3.0 is final.

The reasons are for this are many:
1. We don’t want to have to release a new version of PwnageTool and QuickPwn for every beta release. Last time around during the 2.0 beta period, there were nine (9!) Apple releases, spaced within a few weeks of each other.
2. There are unresolved problems that we’re still working on. It’s currently impossible to get the 3.0 firmware to talk to baseband 02.28 where yellowsn0w lives, for instance.
3. We don’t want to have to support everyone who wants to back down from the betas…because the betas are, well, buggy.
4. It’s silly to play cat&mouse with Apple during a beta period, when relatively few people are willing to actually use the beta software in their everyday lives. There are ways Apple can tighten the screws, and we’d rather not burn methods just for a beta release.

The team also stresses that you should not use unofficial quickpwn releases to jailbreak since you will lose your unlock, possibly forever. They are busy with the hard part of the 3.0 jailbreak (the 02.28 incompatibility and the new compressed ramdisk they’re using). Oh, and also the unlock :) 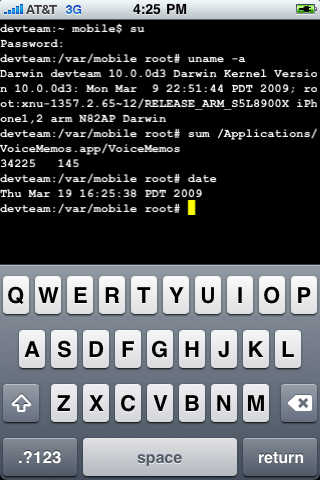 Matej - April 2, 2009 at 10:37am
Well explained. ;) But i would use beta2 and further releases, if i got chance to get the jailbreak for vista and mipatch file.
Reply · Like · Mark as Spam
Recent