A number of iPhone 5s owners have reported receiving the dreaded blue screen of death on their iOS device followed by a forced reboot.

The Verge notes that the BSOD occurs only with the iPhone 5s and is usually caused by Apple's own iWork apps. As you can see in the video below, the error can be triggered by multitasking between those apps.

One suggested workaround is to disable iCloud syncing for Pages, Keynote, and Numbers.

Take a look below to see the error triggered. Apple has yet to comment on the issue but there are several Apple support threads on the problem. 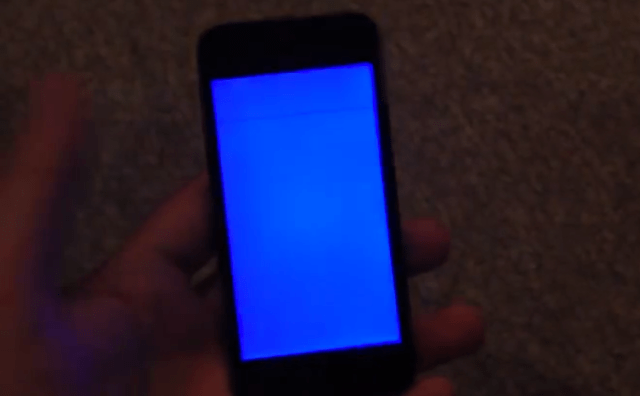 raks - September 27, 2014 at 9:37pm
I tried upgrading to iOS 8.0.2. My phone crashed. After turning it on the apple logo appears and then a blue screen comes up and the phone restarts. This keeps on happening. The phone is not being detected on iTunes as well. I am left stranded without a phone. Please help
Reply · Like · Mark as Spam

Steve0111 - September 29, 2014 at 3:05am
Same stupid thing happened to me while trying to update to 8.0.2. hold power button and home button until screen goes black, when the screen goes black let go of the power button and continue to hold home button until the itunes logo pops up. Now you get to plug in your phone and completely restore through itunes, Hope you have a computer running itunes, if not, you have a brick, Great job apple, glad we pay hundreds of dollars for a microsoft blue screen of death.
Reply · Like · Mark as Spam

Mamu - October 15, 2013 at 1:42am
I have had this happen once just now while I was on twitter. Screen started to close down then all turned blue and rebooted. I do not have the iWork's app etc. Can we take it back to apple for an exchange. Is this a hardware or software issue?
Reply · Like · Mark as Spam

Justabrake - October 13, 2013 at 8:52pm
I wrote down below where my phone has no blue screen but I'm getting a lot of freeze ups ! Anyone else heard of this ? I might have to bring it to apple !
Reply · Like · Mark as Spam
82 More Comments
Recent