Tellini has announced the release of Tablatures 1.13. Tablatures is the first and only Mac OS X editor for PowerTab tablatures. PowerTab is a well-known and widely adopted tablature editor for Windows systems and thousands of transcriptions in this format are available on the net. Tablatures is thus an essential tool for guitar players wishing to learn new songs as well for trainers. Version 1.13 implements a frequently requested feature: the option to change the tablature font size.

Other general features of TabView include:
* Export tablatures in MIDI format for playback or use in other applications (for instance, GarageBand)
* Advanced playback of the tablature: follow the playback on screen, loop over selected parts, slow the tempo down for practice sessions
* Create beautiful prints of the tablature: you don't need to stay in front of your monitor to play along your favorite song
* Share your music even with those members of your band that don't own a Mac: Tablatures and PowerTabEditor share the same file format
* Read and play most GuitarPro 3-5 tablatures

Pricing and Availability:
Tablatures is a shareware product. It can be ordered through our online store at the price of 39 EUR. Registered users are free to upgrade to any 1.x version of the product. The trial version is available on the website. 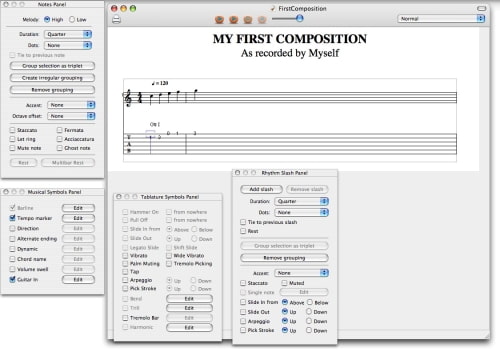