Retina displays for a 12.9-inch iPad are already in production, according to the KoreaTimes. It's previously been reported that Apple plans to release a larger tablet next year; however, this report is the first to suggest that production is underway.

“Apple’s local first-tier display supplier is now producing a 12.9-inch Retina Display to be used in the new iPad, which will be coming out sometime early next year,” an official at a local Apple supplier in Korea told The Korea Times by telephone Tuesday.

“That display is now being manufactured by the supplier's plant in Korea,” he added.

The official said the new tablet display will be nearly UHD.

“The 12.9-inch iPad will have improved picture quality. As the Apple partner intends to boost its lineup for displays that have almost ultra high-definition (UHD) quality, the upcoming iPad will provide very clear quality similar to that of UHD,” said the official. 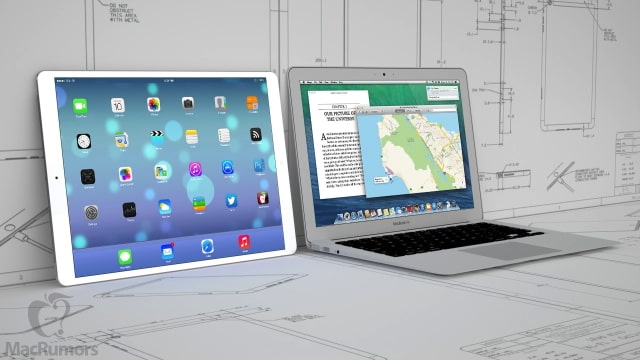 Bugged Out - November 20, 2013 at 7:15pm
Stupid. Tim cook is flailing, trying any stupid form factor for a temporary boost in sales. What would be cool is a screen that can handle a sharp stylus and is pressure sensitive so you can actually draw.
Reply · Like · Mark as Spam

New president please - November 20, 2013 at 10:09pm
You're exaggerating! The picture here is a concept but Tim isn't dumb as you would think! He just announced ipad being slightly smaller with the bezrl but he would release this immediatly, not to mention he said the current ipad is "full sized" and with that being said, there is no point in making it bigger nor would Apple try to increase weight and size of a tablet if it's already big enough!
Reply · Like · Mark as Spam

6italia0 - November 19, 2013 at 7:26pm
Oh dear god, why? Wtf ape? If this is true then seriously WTF?!?! This would be almost as bad as releasing a 6" iPhone, the full size iPad is already perfect in size IT DOES NOT NEED TO BE MADE BIGGER!!!!! This would just ruin the iPad and everything apple has made it to be.
Reply · Like · Mark as Spam
15 More Comments
Recent