EatWillGrow has players guiding Blob as he floats through the cosmic stream by flicking him around the screen, bouncing off walls, avoiding mines and eating food. Every piece of food eaten results in Blob growing slightly, the larger Blob grows the harder it becomes to avoid hitting a mine.

Occasionally a gas-mask powerup will appear, eating this causes time to be sped up or slowed down. Slowing down time makes eating large quantities of food easier while speeding up time makes avoiding mines trickier but causes Blob to shrink slightly. These simple game mechanics combined result in a surprisingly large number of strategies available to the player in their quest for high score domination.

EatWillGrow's high score system is a first of its kind. Rather than using a single central database, scores are stored on Twitter and retrieved via the Twitter search engine. Upon achieving a high score EatWillGrow players are given the option of tweeting the score to their Twitter timeline. Each score tweeted includes a screenshot of their last moment in the game, the player they beat and the point difference between the two scores.

High scores are displayed in two different tables, "most recently tweeted" and "all time". Providing a table of most recently tweeted scores gives every player a chance of being displayed on another's device regardless of skill level while the all time table provides a more traditional high score setup. A players Twitter username is displayed alongside their Twitter avatar providing a face to the score, and the system has the potential for discovering which players have beaten your scores. Concerned about people manually tweeting fake scores? EatWillGrow will only find scores sent directly from game, this combined with the constantly evolving scores table organically minimizes the chances of deceitful players cheating the system.

Of course having a revolutionary high scores system is for nothing if the game itself doesn't motivate people to keep playing. Luckily EatWillGrow features addictive gameplay mechanics that anyone can pickup in minutes. With points being the main focus of the game it is important that a player is constantly aware of their current rank and how many points they need to rank up. In game score and rank info achieves this.

When the current game ends the player is also informed of the player they beat, the player that is ranked above them and the point difference of both. A replay button and no load screens makes the barrier of entry for "one more go" practically non-existant. Eat, grow, tweet and go!

Pricing and Availability
EatWillGrow for iPhone and iPod touch is available on the Apple iTunes App Store for $0.99 (USD). 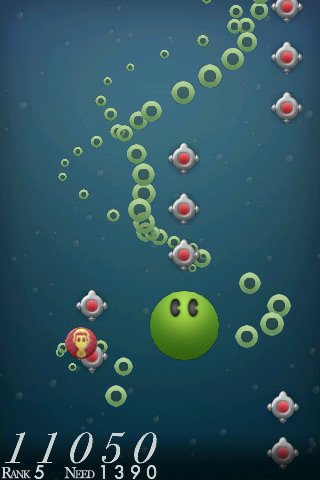 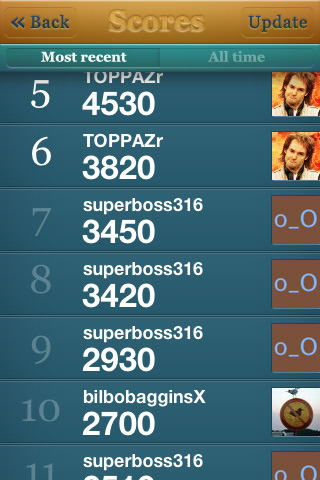