A hacker named Malcor has hijacked a second Mac related website in his quest to rid Mac users of their unhealthy obsessions.

In his blog the hacker says:
"Something is starting to stink, and I'm not the only one noticing. The Macosphere is filling up with crap. With 14 year olds blogging their Mac setups. With entire websites devoted to covering pretty Mac apps. This apple is rotting at its core. It is infected with smugness, and more and more, the symptoms are starting to show, whether it's the eye roll at the non-iPod music player, or the snide comments about my laptop's lack of curves."

Malcor has hijacked two sites in two days. The first being GlenWosley.com and the second being MacApper.com

First he sends notice to the owner and then hijacks the domain for 24 hours. Visitors are presented with an image of rotting apples. 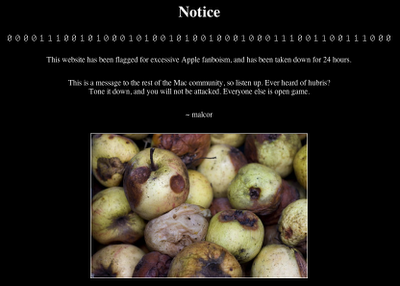