A photo has surfaced online claiming to be of the box for the upcoming Samsung Galaxy S5, reports samsunggalaxys5.nl.

This morning we received from an anonymous tipster the picture below, where the back of the box from the unannounced Samsung Galaxy S5 is shown. It is clearly seen that the packaging is made ​​of the same material as the Galaxy S4 and Note 3, which is made of fully recyclable products. More interesting are the specifications shown on the back, which is somewhat different from the latest rumors.

Of course, the authenticity of this photo is unknown; however, it appears likely that Samsung will officially unveil the Galaxy S5 on February 24th. 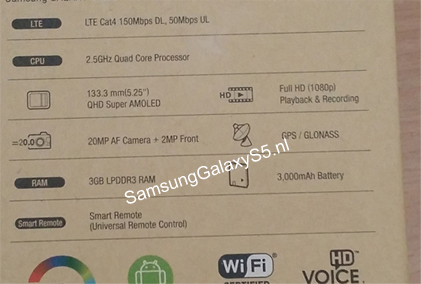 Zack soule - February 13, 2014 at 12:30am
Samsheeps love to seek attention to achieve so much hate on so many levels, samsheep logics on every s5 post.
Reply · Like · Mark as Spam

das - February 11, 2014 at 5:42pm
Informing battery capacity in mAh like Scamsung does makes my blood boil. I don't give a damn if the battery has 3000mAh or 1.21gigawatts. I just want to know how long it will last with regular use, like Apple informs us.
Reply · Like · Mark as Spam

gggg - February 11, 2014 at 6:08pm
Apple never informs RAM nor CPU speed you idiot. If you had enough money you'd get an iPhone.. since you are a poor bastard you envy those with iPhone and try to hate them. Pathetic
Reply · Like · Mark as Spam
10 More Comments
Recent