Taking a closer look at the image in comparison to the iPhone 5s, they were able to determine that the display would be 5.07-inches in size diagonally. It also would have a 16:9 aspect ratio, the same ratio used in Apple's current devices.

Keeping the display ratio consistent would make it easier for developers to transition to the larger screen size and allow existing apps to be scaled up with little or no modification.

Previous rumors have predicted that Apple will release a 4.7-inch and a 5.5-inch device. Take a look at the measurements in the image below and please follow iClarified on Twitter, Facebook, Google+, or RSS for the latest leaks!

[via East Coast Pixels] [via AppleInsider] 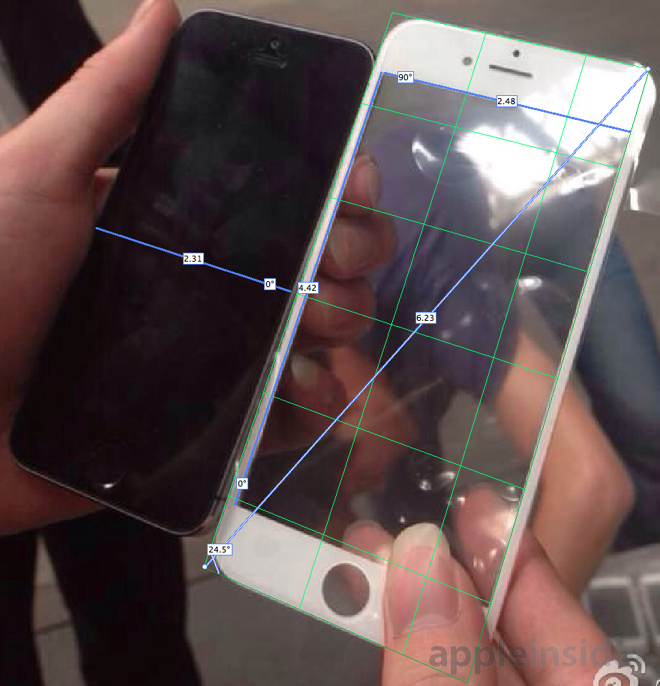 Apple Kunt - April 18, 2014 at 6:31pm
this is the iSampple, Chinese knock off you trolls, you should'n even be here if you cannot tell fake from real
Reply · Like · Mark as Spam

iScample - April 18, 2014 at 7:12pm
And this is a smart ass knockoff by calling people these brainiacs trolls when they're the ones that just says what they think, does it say Chinese model anywhere in the subject, or are you just busy making irony for you to achieve mind rape here?
Reply · Like · Mark as Spam

StewartG - April 16, 2014 at 4:14am
If this is true then it's awesome. Slightly longer and wider phone that retains the same shape as the previous is pure genius. I can't wait to get my hands on it. Obviously I'm sure there will be other improvements and I'm hoping better battery is one of those changes.
Reply · Like · Mark as Spam
13 More Comments
Recent