Microsoft has announced a cheaper Office 365 Personal subscription that gives you full access to its new iPad apps and web apps.

An Office 365 Personal subscription allows for one PC or Mac, and one tablet (including iPad) to be connected to the service, and is the best option for individuals interested in using Office 365. By offering Office 365 Personal, in addition to Office 365 Home, we are better positioned to deliver the right Office to a broader range of households–whether it’s an individual or a family of five.

Office 365 Personal is now available for purchase at $69.99 USD/year or $6.99 USD/month via Office365.com, at Microsoft Stores and through online and retail partners.

More details on Microsoft's new Office for iPad apps can be found at the links below... 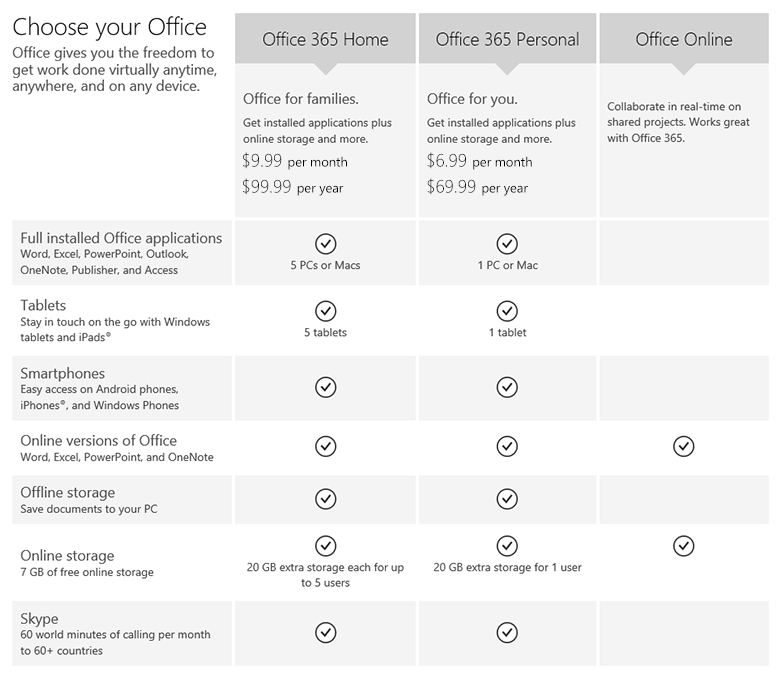 Ricardo Montalvo - April 16, 2014 at 3:44am
I will never pay a dime for such a non sense fees for software usage. You pay for some thing that is never yours. When you look at it in a long run. This is like renting a software, no good at all.
Reply · Like · Mark as Spam

matrixXx - April 16, 2014 at 2:32am
Subscription? Never! 70$ per year for ONE Mac and ONE tablet? RIDICULOUS!! I'm really getting angry at NanoWeak now. They shall vanish from this Planet!
Reply · Like · Mark as Spam

BrightSide - April 16, 2014 at 2:57am
Just looked up nanoweak whatever they are and had something to do with these guys somehow and I think you meant nanoweak.
Reply · Like · Mark as Spam

Great! - April 16, 2014 at 1:03am
MS is entrenched in a lot of business and govt offices. They make lots of money from Office, so I don't see them making it free anytime soon. Apple makes theirs free in order to compete and gain market share for their hardware because Apple's office suite cannot run on non-Apple products without hacking.
Reply · Like · Mark as Spam