BinaryNights has announced the official release of version 1.7 of its popular file manager and FTP utility ForkLift. The release contains major additions to the already feature-rich utility including Folder Synchronization, Merge, OTerminal access, expanded archives management and Duplicate file feature. The release also marks the second anniversary of the first official release of ForkLift, an occasion BinaryNights has decided to celebrate with a new website.

"This is a very happy day for us, a sort of We Did It! moment, and I hope that this nice new update will make people share a little of this moment. The fact that we're still around after two years means that ForkLift successfully passed the first scrutiny of the Mac community, and not only survived, but has become by now a well-established application, with a large and active userbase. This is the celebration of ForkLift's coming of age. Also, this release marks the point where all the major features that we wanted ForkLift to have since day one are now present. Folder Synchronization and Terminal access were the last two items we ticked off of our original list. This is what this B-day party is about."

New in This Release:
ForkLift 1.7 adds Folder Synchronization, a tool that allows users to keep their files synchronized between different volumes, computers or server accounts. Open in Terminal is a much anticipated addition for pro users, as well as the added compression options, including passworded zip files, 7zip, tar and gz archives. The capability to Merge folders is a first on OS X and should be a welcome surprise to most switchers. We see also a number of minor UI and workflow enhancements such as Duplicate file, global preferences for conflict management, plus features for the Go To Folder command, and a performance tweak to speed up FXP transfers.

About ForkLift:
Forklift is a powerful file manager and ferociously fast FTP client clothed in a clean and versatile UI that offers the combination of absolute simplicity and raw power expected from a well-executed Mac software. ForkLift will connect to any remote server FTP, SFTP, Amazon S3, WebDAV, the SMB, NIS and AFP shares on your local network, or your Bluetooth mobile phone- pretty much anything you can plug into or hook up to a Mac.

ForkLift also carries a complete toolbox for managing your files, including Folder Synchronization, Batch Renaming, Archive handling, Application deleter, editing files over remote connections and many more. All these power features are packaged into a Finder-like, dual-pane interface that delivers superior workflow while remaining absolutely familiar to use, along with QuickLook, Spotlight search and all. 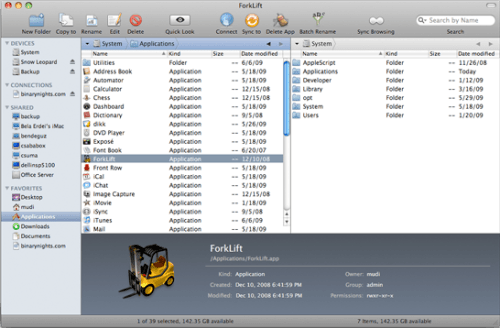