The new Samsung Galaxy S5 was the third best selling smartphone in Britain during May, lagging behind its older iPhone 5S and 5C rivals, reports Kantar Worldpanel.

May was the first full month of Galaxy S5 sales since its European release. Despite its blockbuster launch, the Galaxy S5 was only the third highest selling smartphone in Britain behind the iPhone 5s and 5c. However, among those who did buy the Galaxy S5 across the five largest European markets, 17% switched from Apple. Over half, 58%, of European Galaxy S5 buyers were existing Samsung owners.

Across Europe, Android is the number one operating system with 73.3% of the market. Apple comes in second with 16.6% and Windows is third with 8.1%.

Dominic Sunnebo, strategic insight director at Kantar Worldpanel ComTech, said: “ The Samsung Galaxy S5 has had some success in attracting former iPhone owners across Europe. In general, consumers buying the Galaxy S5 were primarily attracted by its large screen size. This is something Apple is likely to address with the rumoured larger screen iPhone 6 launch expected in late September"

"In the USA the Samsung Galaxy S5 was the second highest selling smartphone in May just behind the iPhone 5S. However, at a total brand level Samsung claimed the top spot with 36.8% of sales versus 32.5% for Apple over the past three months. Apple loyalty is high in the US, with former iPhone owners making up just 8% of Galaxy S5 sales. The majority of those switching to Samsung were LG and HTC users." 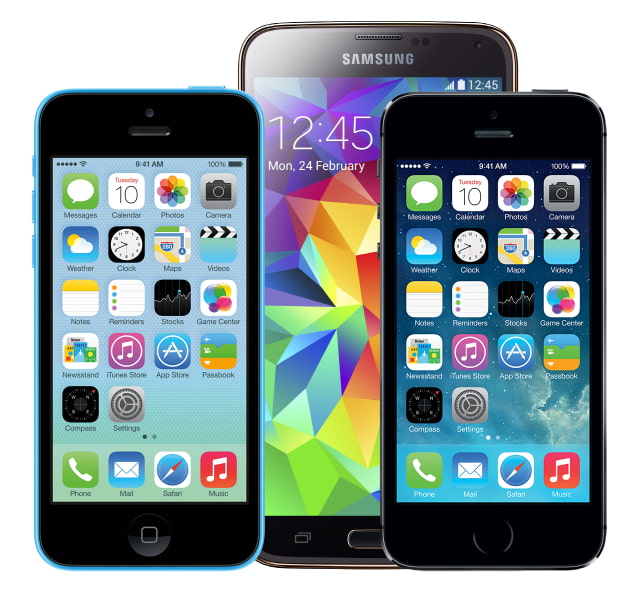 this is for APPLE USERS - July 4, 2014 at 9:21am
Tony why are u here?? This site is for apple users why are u here? Are u really that sad and bored because samsung doesn't have a site like this? Then again if they did, they would probably call it sClarified ! Are u really that interested in apple? You comment on EVERY THREAD saying Samsung is better and manipulating people with your samsung tricks just like samsung does with its ads! So go away and find a life!
Reply · Like · Mark as Spam

Why do you think? - July 4, 2014 at 9:16am
Why do you think samsung released a new ad targeting the iphone? Because they realized their sales dropped and iphone sold better and so they made this ad. That's all they do, they make ads, portray their phones as of their angels, which is a lie because samsung isn't better. I've been to many different airports and I've never once seen apple users charging their phones and sitting on the floor. I've only seen samsung users do that. Why do you think apple doesn't release ads like these, because it's child's play! They would only release if samsung really made the iphone look bad, samsung is like babies sitting on the floor playing with their big plastic toys, who release ads that are big lies!
Reply · Like · Mark as Spam

DONT make up LIES Tony - July 4, 2014 at 9:07am
@Tony I've had an iphone 5 since march 2012, that's 1 year and 4 months and I have never had a problem I even dropped it many times on the floor on its screen and back from semi-high levels and nothing happened, whereas, my cousin owns an s2 she's had it almost for a year, it fell on the floor and the screen is FULLY-BROKEN, she's even had problems with the software, so STOP making up lies about the iphone 5 because it's better than all of your cheap samsung products!
Reply · Like · Mark as Spam
10 More Comments
Recent