Re/code, who was provided an early copy of the teardown analysis, says that although Apple charges $200 more for the 128GB model, it only pays $47 for the additional memory. That means that profit margins are slightly higher (1%) on the 128GB models than on the 16GB models.

“They seem to be configured and priced to encourage you to buy the models with the higher memory,” said Andrew Rassweiler, the IHS analyst who supervised the teardown. He estimates that Apple is paying a price of about 42 cents per gigabyte on the flash memory, which is supplied by numerous companies, including Micron and SK Hynix. 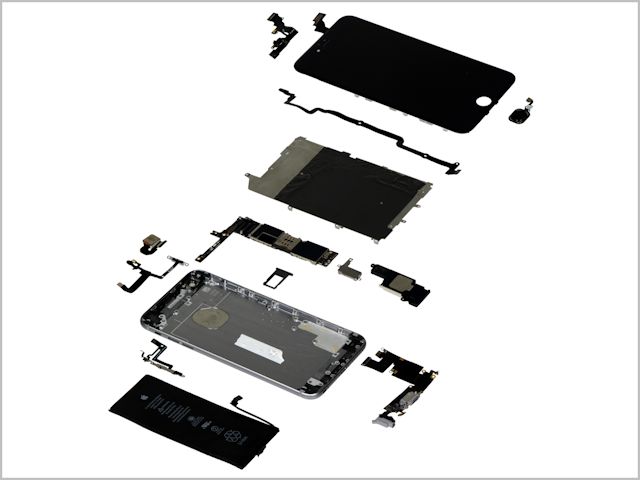 The most expensive part in the new iPhones is the combined touchscreen display assembly. Produced by LG Display and Japan Display those cost Apple $45 for the iPhone 6 and $52.50 for the iPhone 6 Plus. Gorilla Glass is still used to protect the display, despite all the sapphire rumors.

The A8 processor was manufactured by TSMC as predicted. IHS says TSMC is currently producing 60% of chips for Apple, while Samsung is producing about 40%. The A8 processor plus its co-processor that handles sensor information is said to cost a combined $20. It's 13% smaller than the A7 and $3 more expensive.

Notably, while the NFC chip is from NXP as predicted, a second company called ams AG made a NFC booster chip that increases the NFC chip's signal range and performance.

Strangely, Apple also added a second accelerometer to the iPhone 6. There's one from InvenSense and a new one from Bosch Sensortec. "We’re not sure why the second accelerometer is there," Rassweiler said. "It may be for increased accuracy." Bosch also supplied a barometric sensor for detecting altitude.

As before, Broadcom and Qualcomm provided chips for Wi-Fi and Bluetooth and for connecting to the cellular phone network, as well as power management chips to go with them.

Check out a sped up video of the teardown below...

Kurt Cobain - September 23, 2014 at 10:59pm
This should called iphone bendable!! And retard defending the company who profit billions, employed child laborer, over price gadget and copying developer apps and patent it and tax manipulator.
Reply · Like · Mark as Spam

Hurt Hoebian - September 24, 2014 at 11:04am
and you are known as hurt the British delusional of every member of glee since you defend your samsheep legacy like right not.
Reply · Like · Mark as Spam
12 More Comments
Recent