LateNiteSoft has released Sketches 1.7 through Apple's App Store. The latest update of the popular drawing app for the iPhone and iPod Touch takes advantage of some of the new features in version 3.0 of iPhone firmware to provide a better user experience. In addition, a "redo" option has been added and the zoom feature has been improved. Existing customers can download the update for free, whereas new users can purchase a full license of Sketches for just $4.99 / 3.99 €.

For users running iPhone Firmware 3.0 or later, drawings in Sketches 1.7 can now be emailed from within the application, instead of having to quit it when the "Mail Picture" option is selected. Also, pictures are embedded as attachments inside the email message, and thus it is no longer necessary to upload them to an external server so that they can be shared via email. "Our customers are used to a high level of polish and refinement in Sketches, and thus they have been requesting these improvements since our initial App Store release in July 2008; however, the functionality was not possible due to limitations in Apple's SDK at the time" explains Pedro Cuenca, LateNiteSoft co-founder and CTO. "These changes in iPhone OS 3.0 firmware are very much welcome, since they finally enable us to provide the quality user experience we aim for in all areas of our product". "Of course," -he continues- "mail delivery is still possible for users that have chosen not to upgrade to the latest OS yet - in that situation, Sketches will automatically revert to the previous behavior.".

Sketches 1.7 also adds a "redo" option to complement the "undo" feature that has been available since launch. The new feature is available by touching and holding the "Undo" icon to reveal several undo/redo options. "As it usually happens, creating this feature was not a technical challenge, but we decided against it in our previous releases to avoid overwhelming users with too many options", explains Jorge Llubia, co-founder and COO. "We are proud that Sketches can be used by toddlers, their parents or grandparents with the same ease and intuitiveness, and are very careful how to incorporate new features. During the past weeks, however, we have observed that a redo option was missed by some of our customers, so we think it is now the time to add it.".

The Zoom feature has also been revised and refined in Sketches 1.7, to provide a crisp resolution and perfect stroke definition even in the zoomed-in mode. "The previous implementation was OK", explains Pedro, "but we are now really taking advantage of the fact that all the drawings are stored in vector format in order to avoid any resolution loss when working in zoomed mode. In addition, this new algorithm will facilitate a progressive zoom implementation in Sketches 2.0, which we are working on now.".

Other improvements in Sketches 1.7 include bug fixes and minor changes towards resource optimization and performance improvement. According to Jorge, "Sketches 1.7 represents an additional refinement step over previous releases. Sketches 2.0, our next major release, will bring new ideas in User Interface that we are really looking forward to launch, but we did not want to miss the opportunity to improve our existing product to take advantage of some of the new possibilities in iPhone OS 3.0".

Among other distinctions, Sketches has received a 4.5 mouse rating from Macworld, has been favorably reviewed by TUAW, Ars Technica and Gizmodo, and has earned 5-star ratings from iPhoneAlley and 148apps. An Apple "Staff Favorite" in most countries, it was the #9 Entertainment application in the "Best of iTunes 2008" selection posted by Apple in their various sites.

Pricing and Availability:
Sketches 1.7 is available through Apple's App Store for only $4.99 / 3.99 Euro. It can be downloaded for free by existing customers. 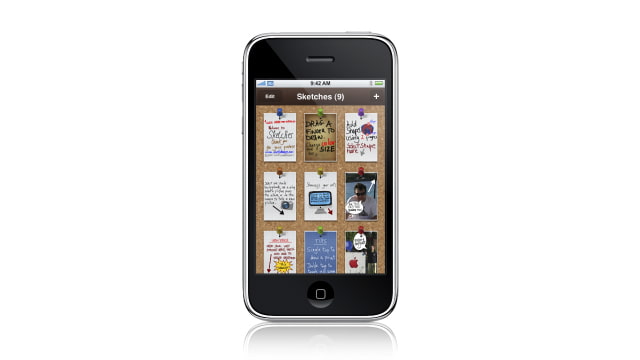