wuonm has announced Layers 1.1, an update to their popular screen capturing utility for Mac OS X. Version 1.1 sports a new feature called WebShot. Users can now capture complete web pages directly from the major Mac browsers including Safari, Firefox, WebKit, and Opera. Capture a complete web page exactly as seen on the screen. In order to grab any desired page status, users can interact with the web page before taking the WebShot.

Users can effortlessly capture the output of different browsers and compare how each one renders the same page. And WebShot understands frames too. Besides grabbing the full page, WebShots may also include the contents of frames/iFrames in separate layers.

WebShot Feature Highlights:
* Supported browsers are Safari 3+ and 4+, Firefox 3.0+, WebKit and Opera 9+
* Captures the actual pixels, as rendered in the choosen browser
* Lightning fast: the average website is a snap to capture
* Monster sized websites (>100000 pixels height) can also be captured accurately
* Users can interact with the page and take the WebShot in the precise moment
* Capture Flash and basically anything that is rendered by the browser

Particularly suited for graphic and web designers, technical writers and developers alike, screenshots captured in Layers are Adobe PhotoShop compatible, allowing anyone to save them as fully layered PSD files, composite images or as separate PNG image files. Easily obtain full fledged PSD files with one layer per window, including menu and desktop icons, dock and menubar.

With an easy-to-use Inspector, Layers features several options to further customize screen captures. Users may filter screen elements to show or hide items, such as wallpaper or Finder icons on their Desktop; or select and save specific items. The Inspector allows users to configure advanced options as well, including Framing, Shadow inclusion, Opacity, or layer bounds. Layers can handle several displays too, so users can disable/enable the capture in each display.

Layers supports all Mac applications that can read PSD files, including Photoshop (5.0 or later), Pixelmator, MacGimp, Adobe Photoshop Elements and others. Grouped layers require Photoshop 6.0 or higher, or any application that supports grouped layers. Layers features default preferences for UI settings, the location where captures are saved, and user-defined Hot Keys.

Pricing and Availability:
Layers 1.1 is priced at $24.95 (USD) for a single-user license. A full-featured, demo that includes a watermark in some captures is available. wuonm is offering a promotion for $19.95 (USD). 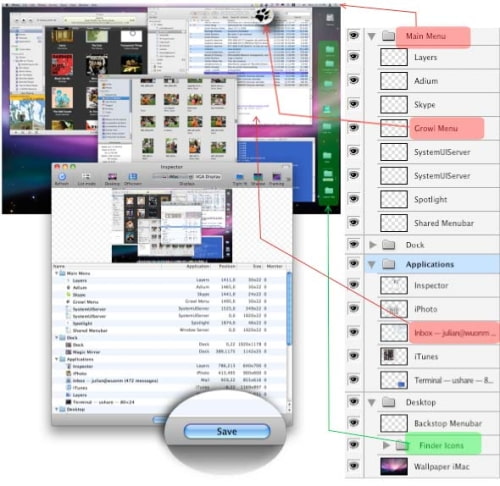