Ninjahit is a ninja assassination game played with friends and co-workers. Imagine sitting in class wondering where is the ninja that has your name? At your office, you are sneaking around cubicles just to get a drink of water. A Truly social and interactive game. When I was young we played tag or hide and seek with friends, as I got older we played more strategic games but still the games revolved around friends.

Marshmallow war was a fun game we played in college we had like 100 players, each received a name and when you hit your target with a marshmallow you would take their target and go after them. The one with the most hits or last man standing at the end of the week won the game. Paintball was also fun, but that required lots of preparations and you could only play in a secluded area. Thus the concept of ninjahit was born!

Imagine a game played in any environment and with as many friends and co-workers as you want and your iPhone was your weapon. You are the ninja and your assignment is to take out your target before someone else eliminates you. Once you locate your target the app opens the camera feature and you take a snap shot of your target. It's the element of surprise that makes the game so fun.

The website is a social site the users are sorted out by zip/postal codes. Thus if you were at USC anyone at USC shows up as a possible buddie and you may add them to your ninja buddies list. Those who are in your ninja buddies list are the ones you can invite to the games you create. The site also keeps track of your ninjahits, scores, and the games you've played. The site also allows you to talk smack with each other. What is a game without some smack talk.

The process of creating and joining a game is done through the ninjahit app. Anyone can moderate a game the alerts are built in and walks you through it. There are three games with in the app. Each unique and you may set your own time limit depend on the size of your group. The time limits are 3 hours, 24 hours, or 7 days.

The first is called "The Assassin". In this game once all the players have joined the game and the moderator tap start then every player is assigned a target. Your mission is to sneak up on your target and take a snap shot of them. Once you have a good shot (not blurry and ambiguous), then tap on the ninja scroll box and talk some smak and send off the hit. Your target's phone will vibrate, and they will see their picture with a message that reads "You've been ninjahit". They then need to confirm "Yes" or "No". When they confirm "Yes" a red slash shows up through their pic and they are eliminated. The ninja that made that hit now receives a new target, which is the target of the most recent player they just eliminated. And so on till there is one player left or the one with the most hits if time runs out.

The second game is called "Me Against the World". In this game each player is fending for themselves. Get any active player and when your victim confirms the hit then their pic with the red slash is sent to every player to notify that that player is dead.

The third game is called "Face Off". This is an intense one on one game. Oooooooh, who is your daddy?

Ninjahit is the element of surprise. That is the concept of the game, you need to be stealth and sneaky like a ninja to be able to get your target before they get you. A real life game that can be played anywhere. A competitive where anyone can be the ninja!

Pricing and Availability:
Ninjahit 1.0 for iPhone is only $1.99 (USD) and available exclusively through Apple's App Store. 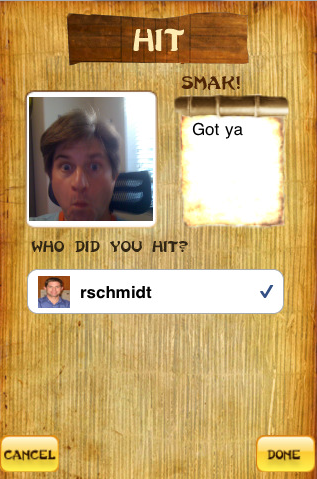 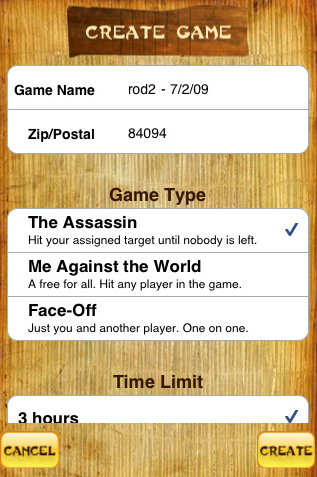