Apple has announced that it will require all new apps to support 64-bit and iOS 8 starting February 1st.

Starting February 1, 2015, new iOS apps uploaded to the App Store must include 64-bit support and be built with the iOS 8 SDK, included in Xcode 6 or later. To enable 64-bit in your project, we recommend using the default Xcode build setting of “Standard architectures” to build a single binary with both 32-bit and 64-bit code.

More details can be found in the iOS Developer Center. 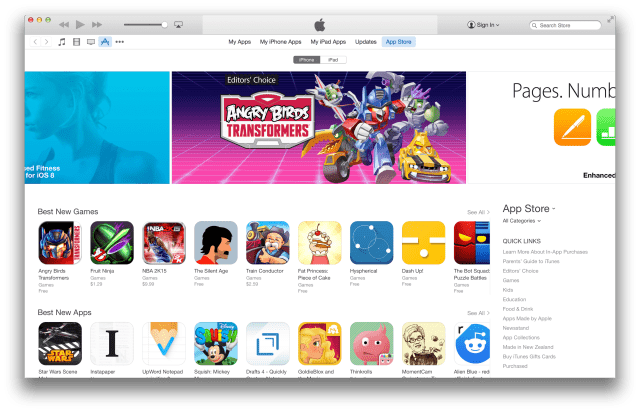 grave hole - October 22, 2014 at 9:37pm
What delusional would love without lots of storage just for a cell phone? Think about how much they need for a device. We're that smart to consider it. Think about it.
Reply · Like · Mark as Spam

yea - October 21, 2014 at 5:47pm
iphone 6S will get the extra RAM. hence the "s". Apple is sooooo obvious in their planning. Everybody can see what they are planning a mile ahead. soo predictable
Reply · Like · Mark as Spam

Bebblix - October 21, 2014 at 5:56am
The problem is 64bit is useless until Apple brings us 4GB RAM on our devices. Why is Apple forcing devs to make 64bit version when they know all the consumers wont get benefits from it? There is a reason why so many app devs dont even bother making 64bit apps and now Apple is trying to create false hype again. My iPhone 6 Plus, iPad Air, iPad mini, none of them will get speed increase from having apps 32bit to 64bit.
Reply · Like · Mark as Spam