Clearwire Communications has rolled out CLEAR's super-fast mobile internet service to serve approximately 1.7 million residents across 638 square miles of Las Vegas. Now, consumers and businesses can access the internet wirelessly, at true broadband speeds at home, in the office, and on the go anywhere in the CLEAR coverage area.

"While it's true that what happens in Vegas stays in Vegas, now, thanks to CLEAR, that doesn't mean it has to stay in one place," said Jeremy Abler, General Manager of Las Vegas market for Clearwire. "CLEAR will bring to Las Vegas residents the super-fast mobile internet experience they're used to having at home or the office, anywhere around town or on the go. We're providing a valuable, new category of internet service designed to make people's lives more enjoyable and more productive, wherever they happen to be in our coverage area."

In addition to the launch of Clear 4G service, the company also announced that, starting on August 1, it will offer the Clear 4G+ mobile USB, a dual-mode 4G/3G modem for customers who travel outside of CLEAR 4G coverage areas that uses Sprint's nationwide 3G network - the most dependable 3G network in the nation - creating a truly national footprint for the most mobile of customers.

Owners of Apple(R) Macintosh(R) laptops will be able to connect to the CLEAR network using a USB modem beginning August 17 with the introduction of the Clear Connection Manager software for Mac. The software is compatible with existing Clear USB 4G WiMAX-only modems and will be available for download from clear.com. Dual-mode Clear 4G+ mobile USB service is expected to be available for Macs in Q4 '09.

As part of a multi-year network build-out plan, Clearwire's 4G network will be available in major metropolitan areas across the United States. In addition to Las Vegas, mobile WiMAX service is already available in Baltimore, Maryland; Portland, Oregon; and Atlanta, Georgia. 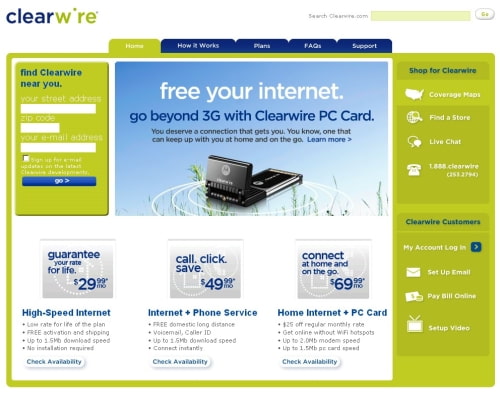