Toughturtle has released a new iPhone and iPod Touch App that will truly be a favorite among sci-fi fans. iComm is a subspace communication device patterned after the very popular act of contacting your spacecraft, or landing party, from a small mobile device. iComm cannot actually call or contact other communication devices or spacecraft, but it is so realistic that you can fool your friends, colleagues, or even strangers into thinking that you can.

"iComm is my way of 'giving back' to the world of sci-fi" , said Todd Barnes, Lead Developer, Toughturtle. "For the longest time I have wanted to make this App, but I was constantly sidetracked with other projects. A few weeks before a 'certain movie' hit the theatres this May I decided that I had to give it a try. The results, in my opinion, have exceeded what I set out to do. I am really happy with it and I hope that others like it too."

Any sci-fi fan should know about subspace communication devices, since almost every sci-fi television show and/or movie has a way of letting their characters communicate via some sort of tech-gadget. iComm IS that tech-gadget, but on your iPhone or iPod Touch. The App functions, behaves, and looks just as it will in the 23rd century and was developed by strictly adhering to the documented specifications of the device.

"I wanted the App to be as true to the original as possible, so I set out on an extensive research mission before sitting down to storyboard the App. I was able to find exact specifications of the device", said Todd Barnes. "I think the coolest function of the App is that you can actually utilize the touch capabilities of the iPhone/iPod and interactively turn the knobs/dials and have it effect the features of the App. I originally was only going to supply 'canned' sounds with the App, but found it lost it's fun-factor very quickly. So, I added the ability to record your own Channel Transmission as well as Response Transmissions. Oh wait, did I mention that the App also recognizes voice through the microphone and responds to you? Seriously, it does."

Major features of iComm - Subspace Communication:
* Flick to Open and Close
* Record your own Custom Transmissions
* Activate the channel dial to ACTUALLY change the Subspace Channel by turning the dial on the device
* Receive Transmissions (supplied or custom) when the Channel is changed
* Transmit your own call with voice-activation, and receive a Transmission Response (supplied or custom)
* Activate the volume dial (gain/call control) to ACTUALLY change the volume by turning the dial on the device
* Activate a Sonic Distortion by turning Channel and Volume to MAX settings
* Adjust microphone input sensitivity
* Set Auto-Hailing functions
* Ten different Moire patterns, two of which auto rotate when iComm is on
* Set a Background image for behind the iComm. You can even use your own image from your Photo Library or use the Camera (iPhone only) to take your own. Hint: Take a photo of your hand and it will look like you are really holding the iComm
* And much more. Check out our website to see the details

Pricing and Availability:
iComm 1.0 is available now on the iTunes AppStore. During the first week of August, iComm will be available as FREE download from the AppStore. After that it will be a bargain for only $0.99 (USD). 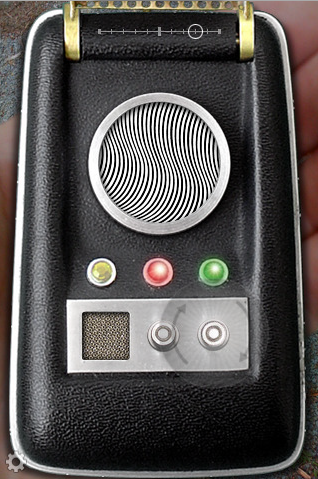 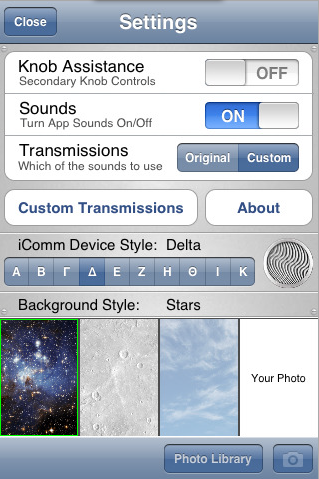