In-Poculis has announced In-Poculis Mahjong 2.77, an update to their popular 3D solitaire game for Mac OS X and Windows. Perfect for mahjong lovers or those who simply enjoy challenging memorization, In-Poculis Mahjong is a memory game where players have to select identical tiles to make them disappear. The main constraint is that they have to be on the layout's borders. All of the Mahjong pieces must be cleared, but it takes some discipline, strategy, and a little bit of luck to win the 5 medals of each theme.

Commonly called Shanghai games, In-Poculis Mahjong features 120 levels and 6 fun themes, including Christmas, Halloween, Asian, Easter, Wonderland and Future. Each theme has its own levels, graphics, musics, sound effects as well as an easy-to-read statistics panel where scores from themes' levels can be quickly observed. To get users started, a 5 step, in-game tutorial is displayed the first time the game is played. Players may also post their scores and photo on the game's website.

"We tried all the Mahjong games we could to extract our prefered features" said Bernard Lerat, co-founder of In-Poculis. "However it was not enough. We wanted to add something really new to the gameplay and decided to change the scoring by the use of combos. You always have to select identical tiles but you have to evaluate many possibities to be sure to create straights or four of a kind"

Among In-Poculis Mahjong's most prominent features is its combo feature to gain more points. Other than beating a particular time for clearing the board, players earn points with combos such as four of a kind (two identical pairs) or straights. If the player can no longer match a pair, the game board automatically reshuffles the tiles.

Pricing and Availability:
In-Poculis Mahjong 2.77 is completely free with no limitations. Gamers are simply asked to donate to help further development. 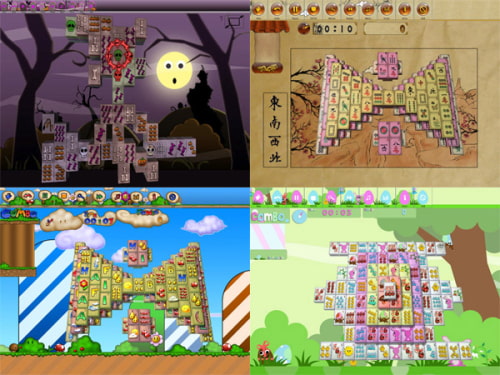