MotionObj has announcd an update to Shake It Out, an iPhone application to help you make decisions. Ever wondered where to eat or which movie to watch? Having a gathering but can't decide on a venue? Shake It Out let you list out the choices and decide for you. Lists are automatically saved for later re-use. You can also duplicate them. Shake a list to see an animation while the application decides for you. Shake It Out is the application to use if you want some randomness to your life. Want to share a list with someone or back them up? Email them from within the application. Do this all in a simple to use interface.

Shake It Out is developed by MotionObj, run by independent software developer, Hwee-Boon Yar who is based in Singapore. Shake It Out is now available on the iTunes App Store for both iPod touch and iPhone. It was primarily developed because the developer often could not decide where to eat and wish there is an application that can help with that.

Shake It Out Features:
* Save lists
* Shake a list to randomly select an item with animation
* Lists can be named
* Enter multiple items at a time
* Duplicate lists
* Email lists 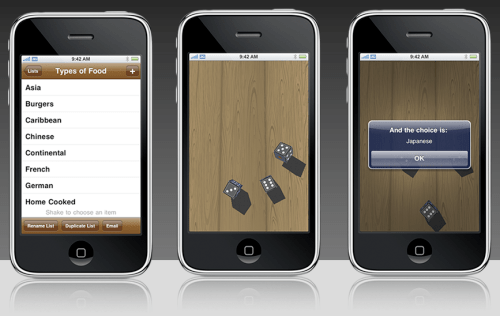