On April 10th, Apple will offer customers an opportunity to try on the Apple Watch before its launch on April 24th.

Appointments to try on the watch will last for 15 minutes, reports 9to5Mac. Stores will use 10 stations to manage what will likely be steady flow of customers. If a station is available, customers won't need an appointment; however, they will be time limited and guided through the hands-on experience. They will also have a chance to place a pre-order for the model they like, for pick up on April 24th.

Each Apple Store will be provided with a special-hands on table filled with Apple Watch demo units, as Apple announced at its keynote earlier this month. Most stores will be provided one table with 10 surrounding Apple Watch try-on stations, while some Apple Stores will be given more tables to meet demand. Apple Stores will begin setting up the Apple Watch tables on April 9th and 10th during special overnight sessions for employees. Employees will also begin a few hours of more extensive Apple Watch training in the coming days, a follow-up to secretive training some employees received before the Spring Forward event at locations in Cupertino, Los Angeles, Austin, and Atlanta.

Apple employees are reportedly being divided into four zones to handle the hands-on demos. One set of employees will be stationed at the try on areas. A second zone will be for sales, with two lines, one for those who have decided on a model and another for those undecided. A third group of employees will answer general questions about the Watch and a special fourth group will assist those interested in the gold Apple Watch Edition models. These employees have undergone additional training to prepare them for selling the high-end models which start at $10,000.

Apple's sales pitch for the smartwatch will focus on three key features: Health & Fitness, Communicating, and Timekeeping. For more details on the watches, please click here.

To find out if the watch will be available in your country at launch, click here. You canfollow iClarified on Twitter, Facebook, Google+, or RSS for additional updates ahead of launch day. 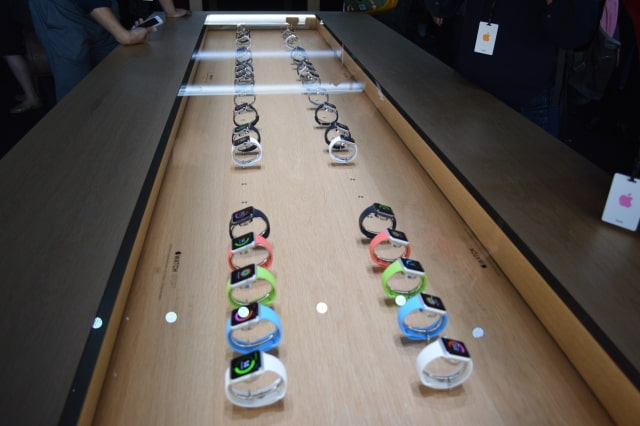 REN IS GAY - March 18, 2015 at 8:41pm
Typical Apple really. The only firm I know whose marketing is so good, they can sell a product that is basically defective and charge a 50% markup on the competition. Nice work if you can get it I suppose.
Reply · Like · Mark as Spam

Ren - March 18, 2015 at 8:55pm
Stereotypical troll seriously? Myth making over shit that said nothing on that gullible claim you wish to take blame for! Such a failure so desperate.
Reply · Like · Mark as Spam
10 More Comments
Recent