“In the quarterly investor call, Apple CEO Tim Cook said, ‘there’s a lot of people that haven’t upgraded to a 6 and 6 plus,’ Josh Lowitz, Partner and Co-Founder of CIRP said. “Our estimates indicate that 40% of US iPhone owners have upgraded to an iPhone 6 or 6 Plus. We see 56 million US iPhone owners with older models who are potential upgraders.”

Mike Levin, partner and co-founder of CIRP noted that the firm estimates a combined 38 million iPhone 6 and iPhone 6 Pluses were sold in the US from launch date (September 2014) to March 2015. For a comparison, the iPhone 5s sold about 18 million in the same period.

Lowitz does note that Apple could face some challenges in the coming quarters with iPhone sales in the US. “There are still 8 million iPhone 4S phones, dating back to 2011, in use,” continued Lowitz. “While they are ripe for upgrade, many of these consumers have owned their iPhone 4S for only a fraction of its three and a half years on the market. The size of this upgrade cohort, relative to the number of new iPhone 6 and 6 Plus units sold, suggests that the coming quarters may prove challenging for Apple in the US.”

CIRP estimated the number and model of iPhones in each quarter by analyzing data on iPhone buyers, their model selection, and their prior phones. 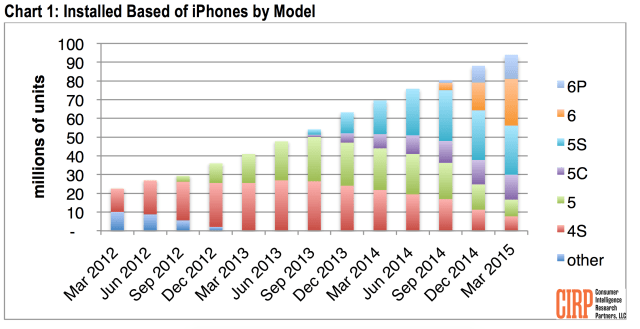