Sales of the Apple Watch have reportedly dropped by 90% since opening week, according to analysis provided to Marketwatch.

Apple has been selling fewer than 20,000 watches a day in the U.S. since the initial surge in April, and on some days fewer than 10,000, according to data from Palo Alto, Calif.-based Slice Intelligence. That is a sharp decline from the week of the April 10 launch, when Apple sold about 1.5 million watches, or an average of about 200,000 a day, Slice estimates.

About two thirds of watches sold thus far have been the lower-priced Sport model. So far, fewer than 2000 gold Apple Watch Edition units have been sold in the United States, says Slice.

Apple has yet to reveal how the Apple Watch has been selling but perhaps we'll get some data during Apple's FY15 Third Quarter Results conference call on Tuesday, July 21st. 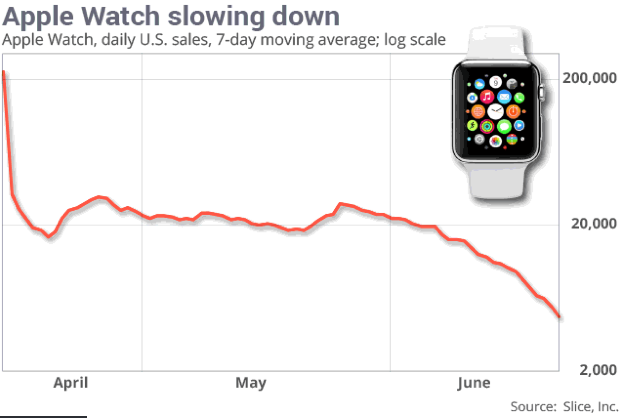 Abba - July 9, 2015 at 6:24am
I actually like the watch.Its very helpful with notifications and eventually I will use it to monitor my excersize
Reply · Like · Mark as Spam

Ray hi - July 8, 2015 at 12:04pm
Ofcourse sales are down / very high first week(s), many people who not living in release countries order by frends or familie or business contacts to ship abroad (to sell at higher price) First day (24 april) in the netherland / belgium 300€ up to 600€ premium had to be paid to get one (due to shortage) which increases sales in beginning, nowadays stocks are available near retail prices. Compaired to other smartwatches apple made some higher-quality (material) watches i think, if you buy rolex kind of watches, it only tells time (maybe date), so compairing prices, apple opened new segment for (new) clients. Happy owner of stainless steel42mm
Reply · Like · Mark as Spam