AssistiveWare has announced the release of VisioVoice 1.2. VisioVoice enhances access to Mac OS X for people with vision impairments through a system-wide talking interface and typing echo, text and image zoom windows, large cursors as well as a document and selection reader. VisioVoice includes a license for the natural sounding Infovox iVox voices for one language of choice.

VisioVoice can also convert text, Word, PDF, HTML and RTF documents to audio files and iPod and iPhone-ready audiobooks. VisioVoice offers features that are complimentary to Apple's excellent VoiceOver screen reader and is primarily intended for those users that prefer mouse-based access to their computer over full-keyboard access.

VisioVoice 1.2 new and improved features:
* Full Snow Leopard compatibility
* Full compatibility with Safari 4
* Compatibility with Infovox iVox 2.0 (to be available as public beta soon), including non-Roman languages
* Enhanced iTunes export with choice of encoder and background import in iTunes
* Speak selection now also works in floating windows such as the one used by Help Viewer
* Improved performance and lower CPU use
* Fixes some bugs including one with the Help menu in Leopard

While VisioVoice provides as much support as is technically possible for applications that do not support Apple's accessibility API, best results can be expected when using VisioVoice with accessible applications such as TextEdit, Safari, iChat and others.

Pricing and Availability:
Pricing for VisioVoice is 249 Euro/USD excluding VAT. Version 1.2 is a free and recommended upgrade for existing users. For more information, a fully-functional downloadable demo and to listen to samples of the voices please consult the product page. For more information contact AssistiveWare directly or one of our distributors such as Origin Instruments Corporation for North America or Kallysta for France. 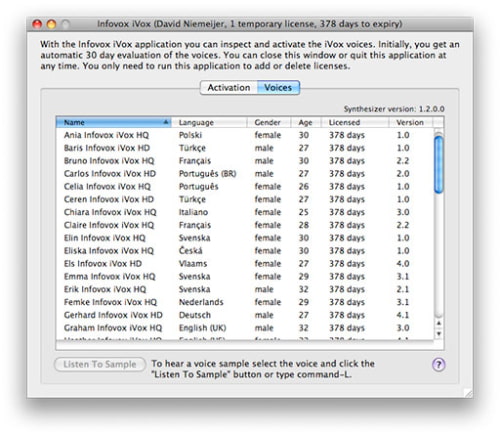