Kerlmax has announced an update to Sharpshooter which adds full support for Snow Leopard. Sharpshooter 1.1 is a background application that displays screenshots as you take them with Mac OS X's built-in key combinations and lets you rename and move them while they are still fresh on your mind. Never again will you have a bunch of generically named pictures cluttering your desktop.

Featured in the Macworld Mac Gems Superguide, Sharpshooter is designed to give you more control over your screenshots. Sharpshooter provides you the opportunity to rename your screenshots with pinpoint accuracy. As you take each one you can decide which folder to save it to, which image format to save it as, what file name to give it, quickly print it, or even trash it if you didn't get exactly what you wanted. Sharpshooter has been described as invaluable by a number of companies in the printing and publishing business.

Pricing and Availability:
Sharpshooter 1.1 is priced at $15.00 (USD) and can be downloaded and purchased at the Kerlmax website. Users can also take advantage of the free fully functional trial period for thirty days. 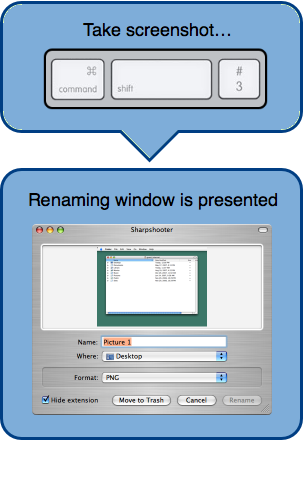