Microsoft dismissed Apple's new iPad Pro in a recent interview, declaring that it will always be a companion device.

Dan Laycock, Senior Communications Manager for Microsoft Surface, told TrustedReviews that while customers can get by with just a Surface, the same isn't true for Apple's iPad Pro.

“Microsoft really wants you to only carry one device for tablet and PC use,” explains Laycock. “Whereas the iPad Pro is always going to be a companion device. The strategies are very different.”

“At one point in time, Apple declared that if there’s a stylus, that’s failure,” Laycock continues. “We’re a huge believer in the pen; we know our customers love it. So to see Apple do something that feels a little bit similar, that is clearly skewed for a bigger screen, and more productivity built in, and the ability to use a pen.”

“We don’t see it as a one-to-one comparison, because this is a full PC, you’re running full apps,” Laycock notes.

Do you want to see Apple unify iOS and OS X? Would you want to be able to run desktop apps on your iPad Pro? Or, does the iPad Pro already replace your MacBook? Let us know in the comments! 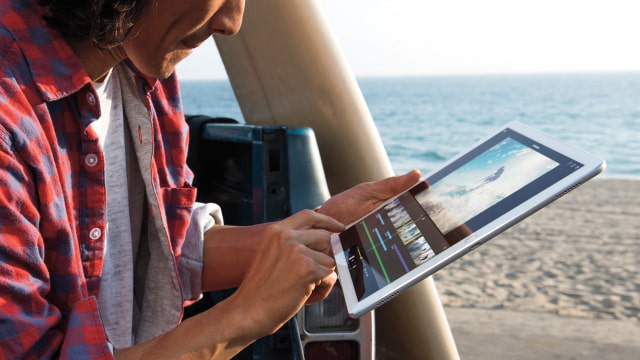 Blake - January 12, 2016 at 11:36pm
I think the argument here is creativity vs productivity (iPad Pro vs Surface Pro). Apple has created an ecosystem that is dominated by design whereas PCs still dominate the business market. These two devices really shouldn't compete with each other. I agree that the iPad is a companion device. It won't replace your laptop but will do a pretty damn good job though. If the pen and keyboard for the iPad were included in the price of the unit, it would be a very reasonable buy. The Surface is a great device for business professionals. It does what they need it to do without delay.
Reply · Like · Mark as Spam

Clive - January 12, 2016 at 10:17pm
I'm a total Apple fan, but I have to agree with Microsoft on this one. I've trialed the iPad pro and it just doesn't work as an all in one device for me. I'm keeping my MacBook and iPad Air. I have to add that the Microsoft office iOS apps also perform and integrate so much better than the Apple equivalents.
Reply · Like · Mark as Spam

I'm a fan to, but.... - January 12, 2016 at 10:29pm
I don't mind having tablet and Mac seperate which is okay for me leaving me having the right oops for the right job, but I have to disagree about what you said about MS apps. I always used apples apps and I did try all from both companies.
Reply · Like · Mark as Spam

Clive - January 12, 2016 at 10:35pm
It's horses for courses and there will always be some features that appeal to some more than others, but what amazes me is that the iOS apps that MS produce are so much better than the Microsoft ones!
Reply · Like · Mark as Spam

Benso - January 12, 2016 at 8:30pm
I don't like both surface pro and iPad pro. They both are missing a point of their usability
Reply · Like · Mark as Spam
11 More Comments
Recent