Adoption of iOS 9 has slightly increased to 79%, as measured by the App Store on March 7th. 16% of users are still on iOS 8 and 5% are on an even lower firmware version. 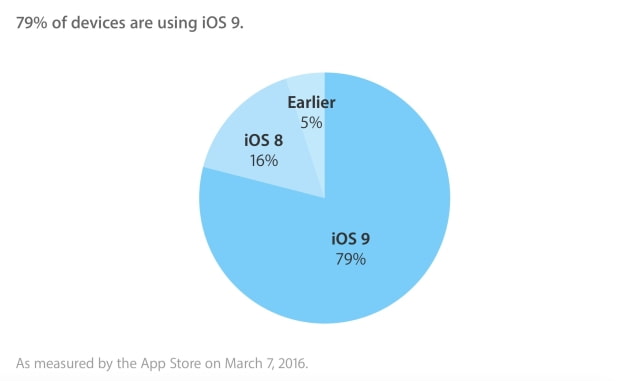 clown - March 16, 2016 at 11:11am
Why they also stop supporting old devices, ( obselite), so they can claim the ratio is so high. Many tube amplifiers are still around , so who cares what version it is. Their so many updates because they dont want you jb that was declared perfectly legal.
Reply · Like · Mark as Spam

clown - March 16, 2016 at 11:09am
I wonder why so high. Maybe because people buy new devices that actually support the version. Because the cost old phone fixing is getting to expensive in many cases.
Reply · Like · Mark as Spam

Nnnnnd - March 16, 2016 at 1:18am
Does latest iOS adoption really matters? I mean, people have no choice but upgrade if they want to fix issues within the iOS also some app developers force people to update to latest iOS in order to use their apps. So these numbers are not really interesting.
Reply · Like · Mark as Spam

Smily Bob - March 15, 2016 at 6:26pm
Not like you have any choice if you need to reset your phone. Sick of the wifi issues with ios9 wishing I could go back to 8
Reply · Like · Mark as Spam
8 More Comments
Recent