The 16GB iPhone SE costs Apple about $160 to build, according to the latest IHS report.

The U.S. version of an entry-level iPhone SE with 16 gigabytes (GB) of NAND memory carries a bill of materials (BOM) of $156.20, which rises to $160.00 when the manufacturing cost is added, according to results from the IHS teardown of a phone purchased from the Apple Store on March 31, 2016. The retail price of the iPhone SE 16GB model is $399.

“The iPhone SE represents an amalgamation of three iPhone generations -- iPhone 5s, iPhone 6 and iPhone 6s -- rolled into something altogether new,” said Andrew Rassweiler, senior director of cost benchmarking services at IHS. “Despite its physical resemblance to the iPhone 5s, the resulting product is far superior. In fact, the only significant tradeoffs a consumer would make with the iPhone SE against the iPhone 6s is smaller size and lower screen resolution.”

The IHS teardown revealed that the iPhone SE borrows many of the same -- or at least extremely similar -- components from three previous phone generations, as follows:

● iPhone 5s: The overall iPhone SE design envelope is very similar in to the iPhone 5s, which launched in 2013. “The size and resolution of the display are the same between the iPhone SE and iPhone 5, though the mechanical components such as the enclosure have been slightly modified,” Rassweiler said.

● iPhone 6:. The iPhone SE shares many of the same radio-frequency (RF) components used for LTE connectivity and uses the same Qualcomm (MDM9625) solution found in the iPhone 6. Depending on the model, the iPhone SE’s cost and performance-optimized RF section supports up to 18 global LTE bands, which is about the same as the iPhone 6 but less than the current 6s. The iPhone SE also shares the iPhone 6 1.2 megapixel secondary camera.

IHS estimates that Apple makes approximately $89 in incremental profit for each iPhone SE 64GB sold when compared with the iPhone SE 16GB. The smartphone's four-inch Corning Gorilla Glass display with integrated, in-cell touch sensing is said to cost $20, less than half the cost of the same display in the iPhone 5s, when it was originally released. On average, 40 percent of iPhone displays are sourced from Japan Display, 35 percent from LG Display and 25 percent from Sharp. 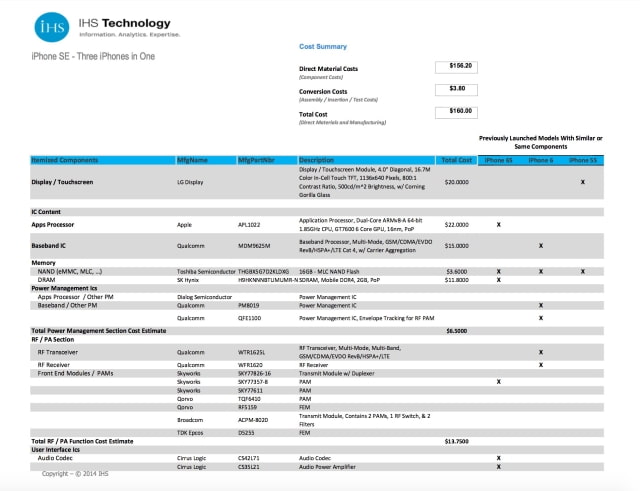 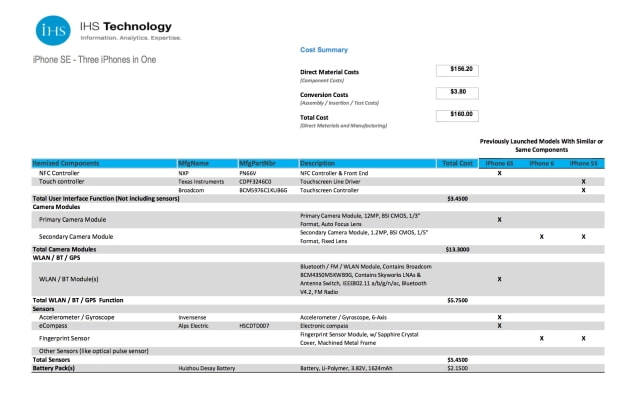