Apple has announced that adoption of iOS 9 has reached 84%.

The jump is likely due to the release of iOS 9.3 which brought improvements to Notes, News, Health, Apple Music and the new Night Shift feature.

Currently, 11% of users are still on iOS 8 and 5% are on earlier firmware versions. 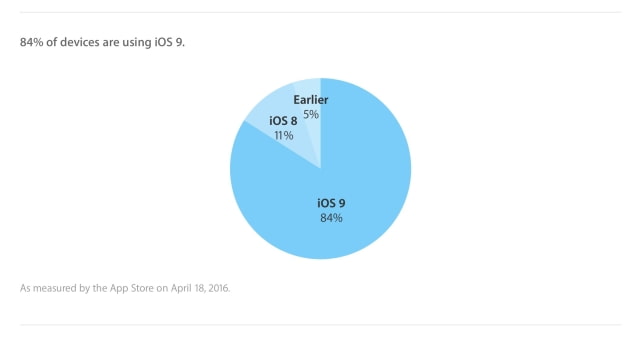 clown - April 27, 2016 at 4:12am
They intentionally dont want development of old titles for old devices not even 1 year old in some cases. They remove the software from the store unless they support the latest software verison. Then when they do support they say they no longer will support certain verisons of ios. The hardware in some devices is more then able to support the software they just dont want it to be able to for profitable of a new device.
Reply · Like · Mark as Spam

clown - April 27, 2016 at 1:42am
Not really just about every software gets - updated at one time. The problem is you cant use alot of the programs unless you update to the latest software IOS. They intentionally force developers they have to support for the latest versions, and stop supporting old versions. In some cases they stop working completely. In many apps your forced to update your device. For soul purpose so you can not JB it. Many newed devices sold have the latest software on it. No where does the article say how many device all ready have the latest software installed by default. The fact JB a phone was rulled legal by the dcma. They just want to be to control what your device does you bought in a store. Thats like saying the $100,000 car you bought 5 years ago will stop working unless you plug into a computer and update it. They make all the software in the car compatible , so you can update the software. Not intentionally making a certain features not work unless you buy a new car.
Reply · Like · Mark as Spam

joker - April 27, 2016 at 3:55am
That doesn't excuse the first iPhone iPad, etc. from supporting any more versions than what it can handle. At least I could just use those to stay on an iOS version released years back because that's the most it can support while staying on a version that has jaiobreak and will never update from that point, but for me, I update because of how many features people miss out on and that there are big fixes which is trying to get people to understand. The jailbreak can wait and it will pay off to those who do wait.
Reply · Like · Mark as Spam

joker - April 27, 2016 at 12:57am
You don't apparently! What this means is that people trust the modern iOS versions and are satisfied with what it does!
Reply · Like · Mark as Spam
6 More Comments
Recent