Apple has dropped to fifth place in Chinese smartphone shipments, losing ground to rivals in one of its most important markets, according to a Counterpoint Research report relayed by Bloomberg.

The report found that iPhones made up 10.8% of devices sold in May, down from 12% a year ago. Chinese company Huawei increased its lead with 17.3%. Coming in second is Vivo, followed by Oppo, Xiaomi, then Apple.

Apple has suffered a several regulatory and trademark setbacks in China of late. The country even shut down Apple's iBooks Store and iTunes Movies just six months after they were launched. However, Apple has continued to invest in China putting $1 Billion in the Chinese ride-hailing service Didi Chuxing. 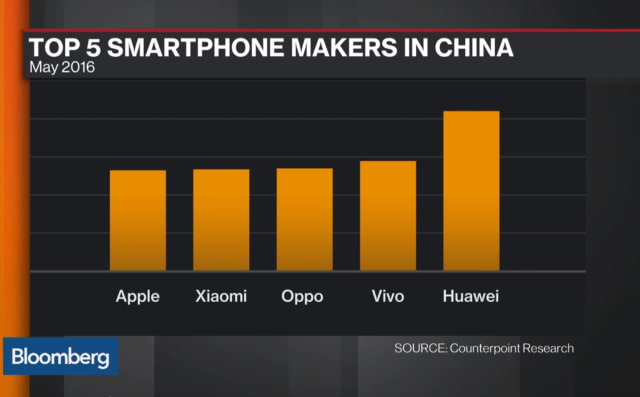 doorgoo - January 19, 2017 at 8:28am
I appreciate you and hopping for some more informative posts doorgoo.chat
Reply · Like · Mark as Spam

HungDongluie - July 9, 2016 at 5:47pm
Iphones barely started in China... Those other cheap phones have been around for years.. who cares... I'm surprise it made the list.
Reply · Like · Mark as Spam

Chip - July 9, 2016 at 12:44am
No matter what they will still give body parts for the king of mobile phones. And by the way China is banning allot of social media apps so for more control the cheep phones that break faster isn't as secure so there you have it push out the best for the worst.
Reply · Like · Mark as Spam

YOU - July 9, 2016 at 12:56am
Yet made in a way for China to understand because of how they have their phones built for them!
Reply · Like · Mark as Spam
1 More Comment
Recent